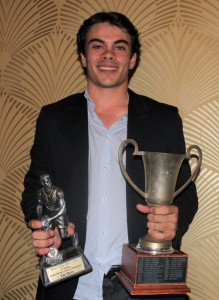 For the first time in five years the Mayne Tigers have a new Club Champion. Former Mayne Junior Zac Quin romped home to take out the 2021 Keith Beavis Club Champion Award last night at Cloudland in comprehensive style with 180 votes and daylight to second place.

Quin achieved the prestigious Tiger Award after an extraordinary period of success where Club Captain Jack Collings held a mortgage over the Trophy for the last four years.

Quin has been a revelation for the club since joining the senior ranks in 2019. He has figured prominently in voting in the last couple of years but it was a breakout performance which saw him dominate the voting this year. In expected corroboration of the standing he is held within the Tiger ranks he also took out the much treasured Mick Nolan Players Player Award as voted by his peers.

In recognition of his unique standing in the Mayne community and of a wonderful career the Mayne Tigers have this year named the Runner Up Best and Fairest Award, the Andrew Housego Trophy. Housego has managed to emblazon his name on plenty of Tiger silverware over his illustrious career but he was very thrilled to have this new award named in his honour and to have the privilege of awarding it last night.

It was fitting that the first recipients of new award would be shared by Housego’s long time team mate Caleb Brown who shows no sign of aging and the young man who inherited his famous number one jersey in Daniel Schmidt. Both Brown and Schmidt had injury interrupted seasons but they still managed to finish in this lofty position on the leaderboard.

Brown was overwhelmed with emotion in receiving the award as he paid tribute to Andrew Housego who he played most of 200 plus games with over the last twenty years but also the winner in Zac Quin. Brown is no stranger to the Club Champion podium having taken out the award twice himself and finished agonisingly close as Runner Up on four previous occasions over an incredibly successful and consistent career.

Schmidt looked like a strong contender for the big award until he was injured mid season but he has a very bright and long future ahead and will be sure to figure prominently in the Club Champion voting for many years to come.

Another tall redhead in Nick Stevenson took out the Third Best and Fairest in recognition of an outstanding season where he just got better and better as the year went on. Recruited from Warragul Football Netball Club this year, Stevenson proved invaluable to the team playing in key positions at either end of the ground as well as in the ruck.

Another young Quin took out the Everton Sporting Club Rising Star Award. Louis, younger brother to Zac added the family name to this impressive trophy in a terrific debut season. This Trophy was presented by Everton Life Member Danny Craven and it holds testament to an impressive list of players who have gone on to forge long careers for the Tigers.

In other awards in the Senior team Casey Barber took out the Most Improved while Sam Threlfall was the Coaches pick.

The other Major Awards for the Club were as follows;