Tigers go down fighting to Panthers 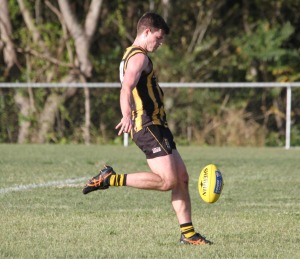 The Tigers Premiership quest came to an end yesterday at the Den at the hands of the Caloundra Panthers. A severely undermanned Tigers put up a valiant effort against a very deserving Panther outfit who were too strong on the day and thoroughly earned their right to take on the Springwood Pumas next week in the QFA Division 1 Hart Sport Cup.

The Tigers endless injury list was added to during the week with South Queensland defender Ryan Eyles and key backman Seb Windsor being ruled out, both with quad muscle tears from last week’s clash with Springwood. The Tigers could almost field another senior team, such has been the carnage this season with serious injuries including three ACL’s, internal organ damage, ruptured achilles, several broken bones and a number of chronic ligament and muscle injuries.

As mentioned previously the club is extremely proud of the playing squad who managed to take the journey this far despite the extraordinary list of wounded soldiers.

Despite all of this the Tigers fielded a competitive group who fought it out to the end yesterday but ultimately could not keep pace with the Panthers.

The Panthers started well to dominate the scoreboard with a three goal lead at the first break while the Tigers were unable to score a major despite their best efforts.

The Tigers were never going to give in this easily as they stormed back into the game after the break with three goals to Cody Caught, Zac McLean and the old master Caleb Brown who despite an injury interrupted season himself, was there to lead the Tigers all the way.

The Tigers had evened the score and looked like they might pull off a miracle before the Panthers steadied their ship with a late goal by their dominant forward Joshua Keleher.

The Tigers ran themselves ragged in the third term trying to keep pace with the more experienced Panthers. Sam Threlfall was doing a lot of heavy work in the middle while Nick Stevenson was also doing his best in the ruck or when up forward. The Panthers edged away to a twenty point lead at the last break and in the context of the game it was hard to see the Tigers fighting back.

In the end the Panthers won the final quarter but the Tigers fought it out with every breath to the end. The list of youth that have managed to gain valuable experience and game time through this difficult year will only add to the Tiger’s bright future.

Louis Quin made his debut this year to join his Rising Star brother Zac giving the coaching staff plenty to smile about while Casey Barber and Cody Caught came of age this year to hold down important regular senior spots. Youngsters Gus Shaw, Hayden Petersen and Tom Eccleston also played important roles for the Tigers along the way and will be valuable to the Tigers in the coming seasons.

The bright side of the day was the Reserves fought their way to a third consecutive grand final despite bleeding talent to the seniors.