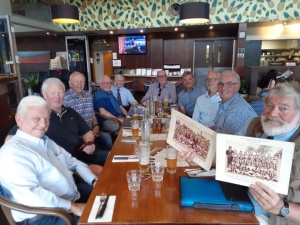 Further to recent posts regarding the passing of Barry Coghill, some of his friends and former players from a junior team he coached in 1962 got together at Bob Singleton’s Pineapple Hotel (a long time friend of Graham McColm and Tyrone Stewart) – Bob was also a friend of Barry.

The 1962 undefeated U13 Mayne Tigers Premiership team gathered at “the Pinie” to catch up and toast Barry.

Graham “Macca” McColm reports that the group’s memories are strong from 59 years ago – “We had a great team and this was the first junior team Barry coached – he did a great job.”

In addition to reminiscing with their cherished 1962 Premiership photo, the “boys” took a picture for this occasion.

On the left from the front is Bart Sinclair, Lloyd Graham, Tyrone Stewart, Brian (Puddy) Warlow who was not in our team but a close team mate of Barry’s and mine host Bob Singleton

On the right .. Kelvin Boys (holding their team photos) Peter Butler, Col Cresser, Graham McColm and Barry Edgley (at the head of the table)

Four of this handsome group went on to play many seniors games for the Tigers as did others from that star studded junior team who could not attend on the day.

The boys shared many memories of their success and cherish the fact that after an amazing 59 years they remain strong mates today.