Tigers fade out against running Pumas 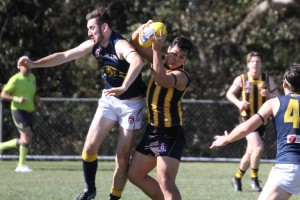 The Tigers hosted the QFA Division 1 Hart Sport Semi Final against the Springwood Pumas in magnificent conditions yesterday in front of a big crowd who had been starved of footy for six weeks.

A grand final berth was up for grabs and both clubs were excited to have the opportunity given the year it has been. The Pumas were at almost full strength while the Tigers were still short of their best side after a horror season which has been well documented. However, they were still very pleased with the way the playing squad has performed to get the club to the finals and there was plenty to like about the group that flew the Tigers flag yesterday. There will of course be no excuses at the business end of the year.

The Tigers drew first blood with a handy snap from big man Sam Nevins but it was an even contest all the way to a much needed break with a quarter that reflected the two top teams throwing everything at each other. There was only a point the difference and the game was poised to be a cracker.

The quarter had it all with representative team mates, the experienced Rowan Page and the rookie Zac Quin going head to head in the middle while the Tigers Ryan Eyles had the job on Puma veteran Greg Friis in another captivating contest.

Just when all looked set for a great game, the Tigers 2021 injury bogey struck again with spearhead Cameron Perkins coming off with a knee injury taking no further part in the game. He was returning from an ankle injury and looked in good form taking a couple of strong marks. Before the end of the quarter the Tigers also lost Seb Windsor who had been on fire at half back.

The Tigers had to scramble to adjust the side with the loss of two key rotations in the process.

The Tigers avenues to goal and forward setup were severely hampered by the loss of Perkins and they just couldn’t hit the scoreboard. The backline were doing a power of work with the old firm of Caleb Brown and Dean Hartley leading the way. Eyles bone crunching tackles were also a feature.

By the main break, the Pumas had pushed out to a four goal lead despite the Tigers best efforts. The Pumas small man Hayden Howse had a damaging window where he set his team alight in the middle of the quarter arresting the Tigers momentum.

The Tigers Marcus Dyson was doing all he could to get the midfield going with some penetrating kicks and his usual physical work while Henry Leong also tried his best to get the Tigers on the scoreboard. Despite ample forward entries, it just wasn’t happening.

The second half was disappointing for the Tigers as no matter how hard they tried the Pumas had all the answers going on to a comfortable win to be first into the Grand Final.

Caloundra beat the Coorparoo Kings comprehensively in the other Semi Final to advance to the Preliminary Final which the Tigers will now host at the Den next week.

The Tigers will need to regroup quickly this week to take on Caloundra but they remain positive that they can put out another strong team to challenge for the second spot in the big game the following week but they certainly won’t be taking the Panthers for granted as they have plenty of firepower to manage as well.

The Tigers will be looking for plenty of support to come along to cheer them on again this week.