Tigers in Home Finals this Week 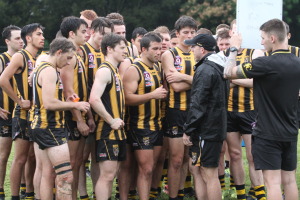 After an extended break due to lockdowns and restrictions, the Tigers are very pleased to have secured the Minor Premiership in the Hart Sport QFA Division 1 Seniors competition.

It has been another very difficult year for everyone with the constant threat and implementation of the restrictions and lockdowns with several games being lost through the season and a very stop start training regime. Therefore it is full credit to the Coaches and the Playing Group for this terrific result in finishing in top spot.

It hasn’t been without drama and significant hardship with the worst injury record in many years which started in the pre-season with the loss of multiple Club Champion Jack Collings and Xavier Craven, both to ACL’s ruling them out for the year.

A horror run has ensued throughout the season with the whole leadership group coming down with significant injuries forcing them to be out of action for weeks at a time. This makes it all the more noteworthy as to how much work has gone into this result from the coaching staff and the effort put in by the whole group.

The club has enjoyed a surge in membership with all grades well stocked with numbers and talent which is evidenced by the Reserves finishing in second place despite the requirement to supply players upwards in big numbers each week throughout the season.

The Seniors will play Springwood in the main game at 2.00pm in what will be a cracker of a game with both sides desperate to go straight into the Grand Final which will be held on the 11th September 2021 at Hickey Park. The Pumas were on the rise before the lockdown four weeks ago and by all reports were fully fit and raring to go. The Tigers will need to be on their game to get over the Pumas so they will be looking for all the support that the club can muster for this very important game at the Den this Saturday.

The Reserves take on the undefeated Coorparoo Kings at 12.00pm at the Den in a game the Tigers are champing at the bit to win. The Tigers have matched the Kings at different times in their three previous encounters but let the game slip at critical times in what have been dour and desperate games. This one won’t be any different so we urge all Tiger supporters to get along to cheer the Tigers on to victory.

The club will be hoping to keep the momentum going and looks to all its loyal followers to get on board from this weekend.

The club will welcome a strong contingent of loyal supporters who invested in the Mayne Past Players and Supporters Group Annual Raffle which will be drawn during the afternoon this Saturday. The club is looking forward to a fun afternoon.