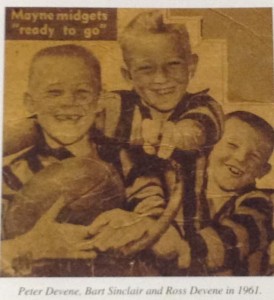 To Members, Friends and Supporters of the Mayne Football Club

In a terrible week for the club, the Mayne Football Club now acknowledges the passing of former Member, Player and dedicated volunteer Ross Devene yesterday.

Ross was one the talented Devene brothers to play for the Tigers through the 1960’s and 1970’s before being severely injured in a car accident in his late teens. If not for this terrible life event, he would likely have enjoyed an extensive senior career.

Despite the setback, Ross was a dedicated volunteer for the club for many years helping the Reserves to their triple Premierships in 1975, 1976 and 1977 amongst many other roles. The Devene family were true Tigers led by Bill and Ede for most of their lives helping the club in numerous roles while Ross’s younger brother Peter played to senior level while also coaching numerous junior teams along the way while being assisted by Ross.

In catching up with several of his former team mates this morning to discuss his passing, it is clear that Ross will be fondly remembered by his many friends gathered through his time playing and volunteering for the club.

The Mayne Football Club wishes to express their deepest sympathy to the Devene family and friends on his sad passing.