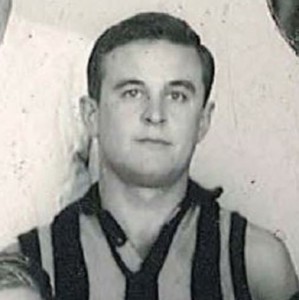 To Members, Friends and Supporters of the Mayne Football Club

The Mayne Football Club acknowledges the passing of much loved Tiger Barry Coghill this morning. Barry’s family advised that he passed away peacefully in the early hours of this morning.

Barry was a triple senior premiership player, a successful junior coach and a capable administrator representing the club with great distinction, dedication and passion over an extended period.

Barry penned the following note to the club recently as a historical record of his time at the Tigers which now forms part of his recognition on the Tigers Roll of Honour. It is clear that he has left a significant mark on the club and the many, many people he played with, coached or served with on Committees. He will be greatly missed.

“I was an Ascot School boy asked to join Mayne Football after a presentation by the legendary Mick Byrne and Noel (Bunny) Burrows, the lowest grade was under 14’s then 16’s to 18’s to Reserves to Seniors.

I made the Qld school boys in 1954 playing NSW with Brian Warlow and Don Barber in the side my first year in A grade was 1956 at 16 years of age. In those days you could play 5 games in the Seniors but had to play 9 games back down, which I did and I repeated it in 1957 when we won the under 18 Premiership undefeated.

I was part of the 1958 Centenary Premiership side and then played on through to 1965. Following from 1958 I went on to the 1961and 1962 winning Grand Finals teams. I also represented Queensland against NSW in 1964.

I started coaching junior football where we won the under 13 grand final in 1962. In the undefeated side there were some Mayne legends - this side included Paul Meakin, Tyrone Stewart, Peter Cubis, Graham McColm Alan Hayes and Bart Sinclair. Following that side I coached the under 17B side for three years only to be knocked out in the final at the Gabba that year.

In 1965 joined the club committee and started the Mayne Social Golf Club in 1967 (we are celebrating our 50th year this year) I resigned from the committee in 1972 after being transferred to Sydney with the company I was working for.

All in all we had a great time over those years with many cherished memories and great characters along the way.”

Barry will be remembered not only as a great footballer, coach, leader and administrator but as a true gentleman and a friend to many.

The Mayne Football Club wishes to express their deepest sympathy to Barry’s family and friends on his sad passing.