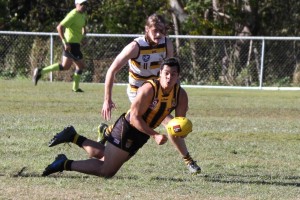 It was a disappointing return from the bye for the Tigers in their local derby with the Aspley Hornets on Saturday as they hardly moved out of first gear for most of the game. The Tigers went down by two points in the dyng stages of the game as they desperately tried to hang on to a four point lead for the last ten minutes.

While the Tigers drew first blood with a goal to Henry Leong, it was clear that this was not the same Aspley group that had fallen to the dominant Tigers in the last two 2021 encounters. The Hornets didn’t boast any big stars but they clearly set this game as one they desperately wanted show their supporters that they weren’t a spent force. The news was that they had faced up to some home truths following their huge loss to Coorparoo last week and it was time to change their ways. It seems that the strategy worked at least for this week.

The first term finished with the Hornets one goal in the lead and having shown they wanted to rattle the Tigers. The Hornets were clean out of the middle while the Tigers looked lethargic and in need of match practice.

While it was a very blustery day and the wind was favouring the southern end of the ground, it couldn’t be counted on to do the work and the Tigers needed to get up and running if they were going to win this game.

The second term saw the Tigers wake from their slumber to kick six goals to the Hornets two with Nick Stevenson providing the tall target necessary when resting from his mountainous workload in the ruck. The Quin brothers, Zac and Louis provided some spark with Zac in particular taking a strong mark in the goal square to set the scene for a much more impressive term. Tim Lyons kicked his first goal in a strong start for the debutant who has been consistently in the Tigers best in the Reserve Grade all season.

The twenty point lead at half time looked to be the margin required to build on but once again the Hornets struck back with some impressive work out of the middle led by Nathan Watts as they wore down the deficit to break even at the last break.

The Tigers were once again faced with a challenge to show why they were in the top spot on the ladder while the Hornets had nothing to lose and be the giant killers.

The Tigers heard a few home truths of their own from the coach at the last break which got them going with a blistering three goal burst started by Henry Leong who had been one of the bright lights for the game to take a very handy seventeen point lead in the context of the game.

However, it seemed like that was it for the home team with the Hornets responding with two of their own to be within striking distance with ten to go.

The Tigers were all on the back foot while the Hornets camped in their forward line in a dour hard fought period which ultimately led to an inevitable free kick in front of goal with only moments left on the clock.

The two point margin was only small for the Tigers but huge for the Hornets given the season they have endured.

The Tigers will need to regroup quickly for the Springwood Pumas at Springwood next week in what shapes as a season defining game.