Tigers hold out Kings in tussle 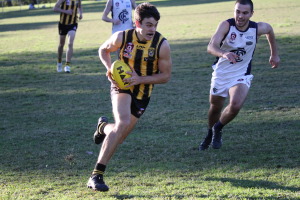 The Tigers held off a final quarter fightback from the Coorparoo Kings to cement their top spot on the league ladder yesterday at the Den on a wild and windy day.

The Tigers got off to a great start with a five goal to one first quarter leaving the Kings in their wake. It was as if they were starting where they left off when the two teams last met when the Tigers blitzed the Kings in the last quarter with a seven goal burst on that occasion.

The Tigers handled the conditions superbly in the first term with the first goal from Adam Minchev a classic example of judging the wind to perfection. Zac Quin was at his usual dynamic best hitting the scoreboard early while both he and Minchev worked the stoppages in fine style under big men Sam Nevins and Nick Stevenson all day.

However, while the Tigers first term was very good, the Kings kicked up a gear in the second term to narrow the gap with four goals to the Tigers two as the wind played havoc once again. A late goal in the term to Zac McLean from a long set shot judging left to right with the wind lifted the Tigers half time break but with only two goals the difference the scene was set for an exciting second half.

It was unusual for the southern end of the Den to be the scoring end on a windy day but at the main break it was clear that goals were a premium at the northern end. And so it continued in the third quarter with the Tigers able to kick more truly to extend their lead to twenty one points after the backline held on grimly managing the momentum of the game with Caleb Brown leading the defence in vintage form with great support from Jono Skippen and Seb Windsor.

The ruck contests between the Tigers’ Sam Nevins and the Kings’ Dylan Reid were a feature of the day with the two big men both putting their significant frames to the test all day.

The Tigers welcomed back Dean Hartley for his first game of the season and it wasn’t long before he blew off the cobwebs to be an influence up forward. Hartley’s return at this time of the season is a welcome addition for the squad.

While the Tigers led all day, they were never able to shake the Kings who welcomed the opportunity to kick to the scoring end in the last term. The Tigers drew an extraordinary number of penalties in the last term to open the game up for the Kings who fortunately were not able to fully take advantage as their wayward kicking let them down. The Tigers however managed the momentum once again to ultimately close off the challenge to win by two goals in what was a hard fought encounter.

The Tigers have a bye next week and will once again host the Aspley Hornets at the Den in two weeks time.