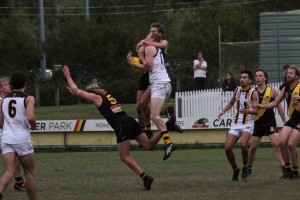 The Mayne Tigers bounced back on to the winners list yesterday with a stirring win over the competition front runners the Caloundra Panthers at North Street with another strong last quarter effort.

The last time the two sides met it was in a deluge at the Den in a dour low scoring bone crunching game which the Tigers held on to win by a mere two points. The weather forecast was shaping for another rain affected game but thankfully it held off for perfect overcast and cool footy conditions with the surface holding up well for a fast and exciting game which is exactly what the home crowd enjoyed.

Both sides have plenty of outside speed when let off the chain and the ability to score quickly so it was full credit to both team’s defence that opportunities were gold dust as scores were once again limited by hard work in the men’s department at each end.

The Tigers had to defend grimly in the first term as the Panthers mosquito fleet of Brad Kimberley and Luca Mason worked the wings to create opportunities for their side. The Tigers evergreen Caleb Brown pushed deep to add his experience to the last line taking some vintage marks while Ryan Eyles and Jono Skippen used all their tricks.

The term ended with a kick the difference in a low scoring hard fought and exciting start to the game setting the scene for another close affair.

The second term was marred for the Tigers with goal kicking tyro Cameron Perkins coming off with a nasty ankle injury to take no further part in the game as the Mayne injury list continues to grow. However, the inclusion of veteran ruckman Sam Nevins to the side provided a new dimension to the Tigers avenues to goal providing a strong target to help fill the void.

It was once again Nick Stevenson who led the Tigers in the big man department while in the ruck, pushing back into defence or taking high marks deep in attack that showed the way. The laconic Stevenson continues to grow in stature for club each week with his exploits gaining a growing following in Tigerland.

Zac Quin was under plenty of attention once again but he continues to find a way to rack up possessions and give the “X” factor that the Tigers thrive on each week. In partnership with the returning Marcus Dyson and the bustling Adam Minchev, the Tigers midfield engine gave the Panthers plenty of headaches.

Zac McLean was very handy for the Tigers across the ground as he returns to his best form while Jack Coghlan threw himself into every contest.

The middle terms were fast and exciting leaving just five points in the game at the last break to the Tigers advantage.

It was game on for the last term as the Tigers stepped up a gear to kick four unanswered goals and return to the winners list in emphatic fashion. They might have had their pride stung last week by the Pumas but they responded in the only appropriate way with this important win to hold top spot on the ladder.

The Tigers play the dangerous and enigmatic Beenleigh Buffaloes next week on the road again in what shapes as another danger game.