Pumas take their revenge on Tigers 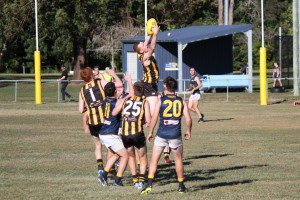 The Tigers didn’t have to wait long for the Springwood Pumas to exact revenge for their last encounter only a few weeks ago. The Pumas comeback arrived yesterday at the Den in cold and blustery conditions with a strong first half while the Tigers looked flat and lethargic for that period of the game.

The Pumas added considerable firepower to the team that went down to the Tigers in May with Rhan Hooper, Greg Friis and Mark Thompson notably back into their side while the Tigers were missing midfield grunt from Marcus Dyson.

However the Tigers otherwise were at considerable strength and expected to be in better form following their last outing at Coorparoo.

The Pumas applied considerable defensive pressure on the Tigers in the first half to accumulate a six goal lead leaving the home side on a solitary goal. The Tigers free flowing ability to move the ball and hit targets was affected as much by the Pumas work rate as it was by the windy conditions which they failed to come to terms with until after half time.

The Tigers defence was under the pump for all of the first half with Jono Skippen and Sam Paterson doing a power of work while Mitch Bruce and Seb Windsor did their best to get the attack going. Nick Stevenson was once again strong in the air for the Tigers with his marking and spoiling a feature.

It was a much more focussed group of Tigers that came out after the main break to settle the game down and improve some of their disposals. Zac Quin was under constant attention from the Pumas but he still managed to get free to give the Tigers some hope of a recovery while his counterpart Rowan Page was his usual illusive self creating trouble for the Tigers.

The Tigers played a much more focussed brand of footy in the third term to hold the Pumas to one goal.

The Tigers possess plenty of confidence in themselves and set out on a mission to bring the game home in the final term despite a thirty three point deficit. They came out of the blocks in fine style with two quick goals to Caleb Brown and Cameron Perkins and looked every bit like they could storm home once again.

Tigers powerhouse ruckman Daniel Schmidt was in fine form once again following his dominant effort in Cairns for the South Queensland team, however a sickening front on charge while he was in a marking contest saw him taken from the ground with a gash to the head. He was subsequently hospitalised with internal bleeding. He remains in hospital.

Unfortunately the break in play saw the momentum shift and with Schmidt out of the game the Tigers struggled to retain control. The Pumas kicked two steadying goals to end the Tigers run.

Two late goals to young guns Casey Barber and Louis Quin improved the score line but it was clearly a game where the Tigers should have performed much better.

Everyone in Tigerland wishes Daniel Schmidt a speedy recovery.

The Tigers travel to Caloundra next week to take on the form side of the competition.