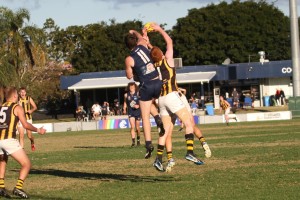 The Tigers stormed into top position in the Hart Sport Cup QFA Division 1 competition yesterday with a last quarter blitz of the Coorparoo Kings at Giffin Park.

After a hard fought three quarters where the Kings led for most of the day, the Tigers left them in their tracks with seven unanswered goals to record an emphatic win. It was undoubtedly the Tigers best quarter of football for many a year and one which should instill considerable confidence for the road ahead.

The Kings started the day in quick fashion with the first goal at the two minute mark and proceeded to get away to a handy lead kicking with a small wind advantage before the Tigers finally found their rhythm. A two goal deficit at the first break looked like a good result given the way the game had begun and with the beginnings of a momentum shift to the Tigers late in the term.

The Tigers continued to lift in the second period to narrow the gap with the Kings and ultimately go into the main break just three points adrift. The Tigers were getting plenty of the ball but their efficiency was letting them down at times.

A much anticipated contest was the clash between two of the best ruckman in the competition, the Tigers Daniel Schmidt and journeyman Dylan Reid, both vying for the top spot in the South Queensland team to play North Queensland next week. Reid held the physical advantage but Schmidt has been in tremendous form in recent weeks. It was captivating to see the two big men go at it in the big contests with Reid possibly the more superior at the centre bounce in the first half but Schmidt was magnificent around the ground with his mobility, aerial work and heavy checking.

The reigning Todd Duncanson Medallist Marcus Dyson was at his most influential yesterday with his tackling and clearance work a feature.

The Tigers dominated possession in the third term but wasted their chances with too much sharing of the footy, allowing the Kings to stretch the margin to ten points at the last break and look confident they were ready to finish off the Tigers.

While the Tiger faithful were hopeful that their team would make a comeback, nobody anticipated the emphatic style with which they went about steam rolling a shell shocked Kings with the last seven goals of the game.

Zac Quin and Adam Minchev kicked right into gear to dominate the centre clearances while the Tigers running players and forwards feasted on the quick entries leaving the Kings under constant pressure. The Tigers junior brigade got right into the action with Cody Caught kicking a spearing left foot goal while Tom Eccleston slotted a set shot from outside fifty on the boundary to seal the game. Gus Shaw gave away size and experience in the ruck to back up Daniel Schmidt and play an important role for the Tigers when required.

A high flying Nick Stevenson led the back half but the defensive highlight of the day was Mitch Bruce running down Kings speedster Shayle Korander Matheson.

The Tigers will enjoy a welcome break with the intrastate game next weekend.