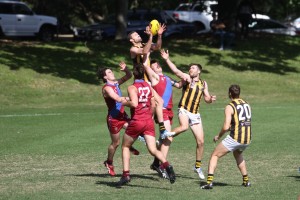 The Tigers had to overcome a very determined University yesterday in the Hart Sport Cup at St Lucia with the Red Lions playing their home ground to advantage all day.

The Tigers welcomed back team leaders Zac McLean and Jack Coghlan in two significant ins for the group but once again there was a rotation of players due to niggling injuries which continues to make it difficult to select a settled twenty two. However, the club has to be pleased to see so many young players get their opportunity to make the grade and in turn expand the depth of experience.

While the Tigers led the Students all day, they were never able to shake them off with accuracy a factor as the game developed. The Tigers took a three goal lead at the end of the first term and it appeared they would comfortably accumulate a winning score and expand the lead as the day progressed.

However, the second quarter saw the Tigers dominate field position to pepper the goals but to the Students credit they flooded their backline at every opportunity to frustrate the Tigers frequent entries.

Caleb Brown showed he is in vintage form taking advantage of the small oval to be the everywhere man as he accumulated possessions from the traditional wing position to lead his opponents on a merry dance all day. A high mark in the goal square in the second quarter in classic style added to his extensive highlight reel to the delight of his many supporters.

Harley Goodwin on the other flank revelled in the conditions as well to accumulate possessions at will and drive the Tigers into attack with his raking left foot. He has been a revelation this season and continues to improve each week.

The Tigers went into the half time break with a similar margin to the first after a closely fought quarter in congested conditions.

It was more of the same in the Third term as the Tigers once again dominated forward fifty entries only to be repelled by some very good defence from the Students. It was very good defence in the Tigers back half as well with Nick Stevenson taking some high marks and impressive spoiling work to show the way. Seb Windsor was cool in a crisis as well to give the Tigers a solid base in the last line while Mitch Bruce was very effective.

Cam Perkins made the most of his opportunities in the spearhead role but seemed to have incurred the displeasure of the men in green with some unusual decisions going against him. He still managed to kick a handy three goals to keep the scoreboard ticking over.

Dan Schmidt was critical to the Tigers success with his strong work in the ruck and around the ground matching the Students numerous big men.

The last quarter saw the Students throw everything at the Tigers with each side kicking four goals as the term dragged on for an incredible thirty eight minutes. The Tigers were very pleased to come away with the win as the competition mounts each week. The Tigers will play Coorparoo next week looking to turn the tables on the Kings from their last encounter.