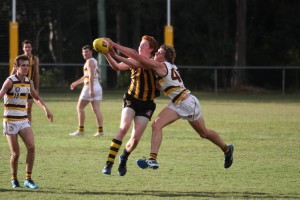 The Tigers had several reasons to excel yesterday at the Den in their local derby with the Aspley Hornets. Club Champion Caleb Brown was playing his 200th game for the Tigers in front of the Annual Reunion Day crowd and the much prized Mick Nolan Medal was once again up for grabs for the Best Mayne Player on the day. The Tigers were also very focussed on making sure they won this game to stay in touch with the ladder leaders in this very competitive competition.

There was plenty of formality before the game got underway with commemorative photos taken with the Brown extended family as well as the 200 club incorporating Andrew Housego and Don Barber. Paul Meakin was unable to attend but extended his best wishes to the new Member of this exclusive Tiger group.

Brown led the Tigers out as the 2021 Skipper in his sixth stint in the role he is this year sharing with cousin Jack Collings to the rapturous applause of the Tiger Army including the 1961 Senior and 1981 Colts Premiership teams on hand for the Reunion Day.

The Tigers took a little while to settle into their stride as the Hornets did all they could in the first term to dampen the emotion of the day. Both the Tigers and the Hornets fielded very young teams setting the scene for the next few years to come for these two proud clubs who always give it all in these local derbies.

The Tigers held a ten point lead at the first break after a fast paced and exciting start but the home side got right into gear in the second term with a six goal blitz while the Hornets were unable to record a major. Cameron Perkins took up where he left off in his last skirmish with the Hornets kicking four goals to half time on his way to seven for the day and a culminative total of seventeen against the Hornets this season.

Ruckman Dan Schmidt continued his stellar form as the Tigers number one ruckman. He was dominant in the ruck contest and his work around the ground, in the air and around the stoppages gave the Tigers small men abundant possession to control the game.

The half time break was just what the Hornets needed to regroup as they managed to pull back the lead with a stronger third term frustrating the Tigers with concentrated defence and hard work across the middle to win the quarter.

The Tigers needed to finish the game off strongly to snuff out any thoughts of a Hornets revival which they duly did with another dominant quarter kicking six goals with no reply.

The Tigers Zac Quin was once again mercurial with his ball control, pace and evasive skills. A goal off one step from outside fifty in the second term had everyone in awe.

The Tigers young brigade including Cody Caught, Gus Shaw and Tom Eccleston showed the future for the Tigers is looking bright. Harley Goodwin showed the way with his silky left foot in action pinpointing passes all day while Henry Leong was strong as he displayed all of his well known ability.

The Mick Nolan Medal was presented to Dan Schmidt by Nettie Nolan for his strong efforts on the day. The award is decided on the player’s player votes in a strong endorsement of Schmidt’s performance by his peers.

The Tigers play University of Queensland at the university next week as they look to stay near the top of the ladder. Two upsets were recorded yesterday with Beenleigh downing ladder leaders Caloundra and University knocking off Coorparoo demonstrating the closeness of the competition.