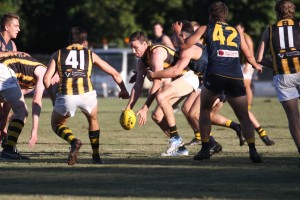 The Tigers fought back and held on to break a long standing curse at Lowe Oval by defeating the Springwood Pumas yesterday in an enthralling game.

Mayne have taken the drive down the highway to Springwood for many years now only to leave disappointed despite each club’s respective standings at the time as the Pumas play their unique ground to perfection. It was therefore especially sweet to come away with the points in what was another hard fought encounter and with the lead seesawing through the last term.

Both sides went into the game with a long list of big names unavailable so it was a game up for grabs for each club in what is shaping as an intriguing competition. Every win will be critical as the season progresses and the fight for final spots will be highly prized.

The Tigers welcomed back Caleb Brown as he assumed the mantle of Captain once again to lead a much younger and inexperienced team than he has been used to in more recent times. It was Brown’s 199th appearance for the Tigers and he could not have been more pleased to enjoy the win at Lowe Oval in such stirring fashion.

The Tigers new look defence saw a new hero emerge yesterday with 2021 recruit Jeremy Duck taking charge to thwart the Pumas across half back in an impressive display with some telling marks for his highlight real as well as some important spoils when required. Ryan Eyles was also strong down back but his day culminated in a last quarter run in the middle proving a master stroke as he changed the momentum for the Tigers to gain some much needed centre clearances leading to the Tigers ultimate victory.

The Tigers led the game for most of the first three quarters but terrible kicking for goal left the door open for the Pumas who would not give up. The Tigers kicked four goals in the opening term to take a comfortable lead but lost their way with thirteen points and only three more goals to the final break. While they dominated possession and field position they could not deliver the final blow.

Springwood however took their opportunities with both hands to overtake the wayward Tigers and assume a two goal lead at the final break. The third quarter had been an enthralling battle as the Tigers peppered the goals but the Pumas jumped out the back to kick truly.

Dan Schmidt once again shouldered the ruck work against strong opposition but it was his work around the ground which was most telling with strong marks at critical times and bullocking work in the packs. Zac Quin worked hard to keep the Tigers going forward while Henry Leong was the swing man for the day having to be moved down back as the Tigers fought on after half time down two men.

The Tigers went into the last quarter down by two goals but quickly set about reducing the margin with goals to Caleb Brown and Zac Quin off a strong mark. A two point lead was temporarily achieved before the Pumas hit back. It seemed all over though when the Tigers took a twelve point lead with goals to Jeremy Duck and Adam Minchev and even more points as they locked the ball in the forward fifty but again the Tigers were thwarted with two free kicks in succession leading to a goal for the Pumas before the final siren brought jubilation to the small but passionate Tiger Army.

The Tiger will play another local derby next week against the Aspley Hornets at home in the Annual Mick Nolan Reunion Day. The Tigers will be recognising the 1961 Senior and 1981 Colts Premiership teams as well as Caleb Brown’s 200th appearance for the club.