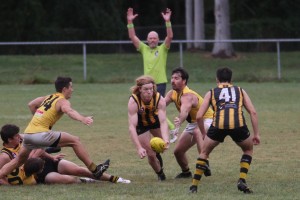 The Tigers returned to the winners list in a hard fought clash with previously unbeaten Caloundra in slippery conditions at the Den yesterday.

In four quarters of dour, uncompromising and bruising football the home side held out the Panthers to claim the critical win and stay in touch with the ladder leaders. A loyal Tiger faithful were on the edge of their seats for the entire game as neither team could break free of the other with tremendous defence, close checking and big tackles the order of the day.

The Tiger hierarchy were last night very pleased with their team’s attention to detail and concentration to hold out the Panthers who have been taking all in their wake so far this season.

It was a very mature effort from the Tiger’s young ruckman Dan Schmidt that set the scene for his side’s win as he conceded size to his equally hard working opponent Max Jacobson. Schmidt was brave as he not only shouldered the majority of the big man’s work in the ruck but also around the ground making contests to give the Tiger’s critical possession.

The game commenced in pouring rain with large puddles developing everywhere to bring the game to ground level and a low scoring affair. The first quarter saw only one goal kicked by Henry Leong to give the home side a small but in the context of the game, an important lead.

In similar fashion the two teams were only separated by a point at the main break with just three goals for the term. It wasn’t a day for the forwards with neither side letting the other get any clean entries suiting both sides bustling backmen. Ryan Eyles was in his element for the Tigers crashing packs in comprehensive fashion while Jeremy Duck stunned everyone including his opponent with one of the most bone rattling tackles seen at the Den since Andrew Housego prowled the Den.

Sam Threlfall was once again a hard worker as he tackled his way to the best player list in an important contribution for this hard fought win.

The Tigers went to the final break with a thirteen point lead which seemed like an insurmountable lead given the day’s scoring but the game was far from over.

The Panthers stormed out of the middle in the first minute of the final quarter for Daniel Dzufer to goal and put a scare through the Tiger supporters. It was nip and tuck for the next quarter of an hour before the Panthers Chris Taylor scored their fourth goal to narrow the margin to just two points. However it was a herculean effort by the Tigers to hold the footy in their forward line for most of the remainder of the quarter as one stoppage followed another before the welcome sound of the siren gave everyone a chance to exhale.

It was an important win for the Tigers with a lot of credit to go to the acting Captain Jack Coghlan who led his team from the front in a gallant effort.