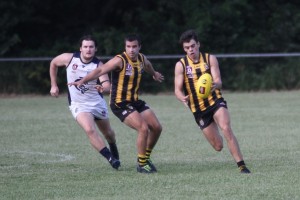 The Annual Anzac Day Clash between old rivals Mayne and Coorparoo was a game fitting of the occasion as both sides gave their all in front of one of the largest and most passionate crowds seen at the Den in many years.

The game got underway after a moving ceremony which once again involved the Pipes and Drums National Serviceman’s Memorial Band providing considerable gravitas to the occasion as they closed their set with the Australian and New Zealand National Anthems.

The Tigers considerable list of outs increased again this week however the depth of the current list of youth provided another opportunity for others to step up and on this occasion it was ex Mayne Junior, seventeen year old Louis Quin who took his chance in a very impressive debut to join his older brother Zac who dominated the game whether in the middle or up front. The older Quin finished with three goals while Louis kicked his first goal fittingly from a handball from his brother. He bobbed and weaved to slot it through to be one of the highlights of the day.

While the Kings drew first blood with a goal to Ben Lynch, the Tigers were off to a flying start with a six goal to three first quarter in frenetic pace. Cameron Perkins kicked three in the first term following on from where he left off last week. He went on to kick six for the day in another strong performance under plenty of attention.

The second term saw the game settle into an arm wrestle with plenty more scoring as the Tigers just outpointed the Kings five goals to four. While the Tigers enjoyed a four goal lead at the main break, the Kings were pressing hard with their size and aggression a factor. In fact they paid dearly on occasions for their aggression as the umpires took a dim view of their approach.

The Tigers have enjoyed a number of new recruits this year with St Josephs Geelong newcomer Sam Threlfall proving to be a real find contributing significantly as a utility player while sixteen year old ex Mayne Junior Hayden Peterson in his second senior game played with maturity well beyond his years up forward.

The size of the Coorparoo big men started to make an impact after half time as the Kings narrowed the Tigers lead to just two points at the mid point of the third quarter with a four goals to one onslaught. The Tigers were battling hard to slow the Kings down but the high pace and scoring continued unabated. The Kings took the lead and went into the last quarter with a one goal advantage.

The Kings came out of their huddle to kick three quick goals to break the game open. The Tigers Zac Quin settled the ship with two quick goals to keep the game alive but in the end the Kings kicked a settling goal to snuff out the final fightback in what had been a very entertaining game with both sides skill level and high scoring a factor which kept the large crowd on the edge of their seats.

Mitch Enwright from the Coorparoo Football Club won the Wayne Stewart Medal which was presented by Tyrone Stewart.

The Tigers play undefeated Caloundra next week at the Den.