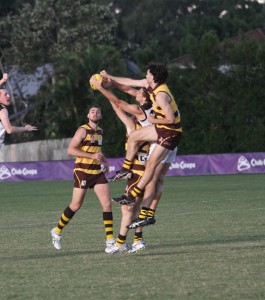 The long awaited opening game for the Tigers finally came around with a local derby against the Aspley Hornets at Graham Round last night. The game was part of a blockbuster day for the Hornets as they opened their VFL account against Port Melbourne in scintillating form in the preceding game but the Tigers ended the celebrations for the Hornets with an emphatic nine goal win in the QFA Division 1 Hart Sport Cup clash.

The Tigers fielded a new look side with nine changes to the 2020 Grand Final team including seven debutants. It is hard to imagine a more dominant debut than that produced by Cameron Perkins as he helped himself to ten goals in a masterful performance in the spearhead role for which the home side had no answers. Perkins kicked goals from all points on the run as well as those resulting from some impressive overhead marks.

The Tigers produced some of their best football early on to show they meant business with a six goal to one opening stanza setting the agenda for the day. The Tigers shocking run of pre-season injuries with the leadership group in particular elevated club favourite Jack Coghlan to Captain, a role he is clearly made to perform as he led the way in the middle with his pace and drive to get the Tigers up and going.

Former Mayne Junior Zac Quin was once again a mercurial force either when in the middle or up forward as he dodged and weaved his way around the ground and then took critical marks when up forward. A four goal effort for the day was due reward for his impressive efforts.

The Tigers defence has been a feature for many years but for the first time in a decade it was not led by Dean Hartley but you could see that his young protégé’s have been taking it all in as they exuded the same miserly traits of their mentor. Ryan Eyles gave away size and height but was strong and suitably poised to take on the Hornets key forward Alex Andrews while Jordan Morrison, Mitch Bruce, Sam Paterson and Seb Windsor worked together as one.

Josh Chapman was impressive for the Hornets but he didn’t have enough support to stop the determined Tigers as they extended their lead to over forty points at the main break. The Hornets also paid dearly for their inaccuracy in front of goal as they accumulated eleven points but only three majors.

It was more of the same after the main break with the Tigers piling on another five to the Hornets one to end any chance of a comeback for the home side.

The last quarter saw the Hornets kick five but it was all too late.

In other games Caloundra accounted for Springwood to show themselves as the early frontrunner of the competition while Coorparoo got over the top of University in a close one.

The Tigers meet Coorparoo next week at home in the annual Anzac Day clash.