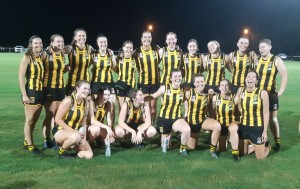 The Tiger Girls had their first chance to test themselves at Pine Rivers on Friday night against the experienced Swans and can be very pleased with their first outing in the black and gold.

After four months of training and the majority of the team new to the game it was always going to be interesting to see how far they had progressed. The Tigers showed plenty of determination making it a strong contest all across the park.

The Pine Rivers Swans team have been going around for four years and currently play in the Division 2 North Competition so provided a reasonable test on how the Tigers are going to need to perform this year.

While it was just a practice match with both teams taking the opportunity to mix things up and experiment with different approaches it was evident that the Tigers have the fundamentals down now and with some continued work on structure and game sense they have all the ingredients for a successful and enjoyable first season.

The Tiger Women will play their first fixture as part of the Anzac Day Clash event at the Den on the 24th April against Mt Gravatt at 4.45pm immediately following the Senior Men’s game against Coorparoo.

In the only other practice match for the Tigers for the weekend the Thirds played old foes Zillmere at the Den on Friday night.

As usual the Eagles sported a very experienced lineup who will once again be around the mark to beat.

The Tigers have an extensive list of players for the coach to get to know and try out before the season kicks off in two weeks. The Tigers sent out 26 players this week to test themselves with a broad range of age and experience in the group.

The Tigers will be very pleased to have new ruckman in Andrew Gallina in the side who showed he has plenty to offer in the ruck and around the ground while Brady Athanasiov enjoyed a rare chance to go up forward to provide a target for the team, a role he seemed to enjoy using his pace and strong kick to advantage.

Rookie Tom Atchison also hit the scoreboard again in only his second game as he shapes as a handy goal sneak for the Thirds this year.

The Thirds will need to be on their game every week this year as the competition continues to go forward. The long list of available players also means competition for a role will require plenty of commitment and hard work to secure a spot.

The Thirds will have an intraclub this week as a last chance to hone some match skills before the first round kicks off at 7.30pm on the 23rd April at the Den against perennial Friday night specialists Jimboomba.