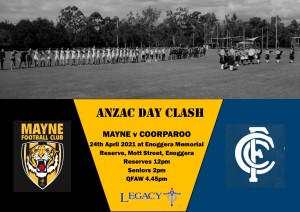 Traditional rivals the Mayne Football Club and the Coorparoo Football Club come together again in the Annual Anzac Day Clash on Saturday 24th April 2021 to honour all Australians and New Zealanders who represented their respective countries in times of conflict.

The two clubs have a long and meritorious history over many decades and have more recently reformed a strong respect and bond with each other in making this important day a special occasion.

The Anzac Day Clash will include the attendance of Legacy Australia who will be collecting funds for the partners and children of those who gave their lives or their health for our country.  They provide the essential social, financial and developmental support that these families depend on each day. You can donate now at Legacy Australia or on the day.

A formal Anzac Day ceremony will be conducted between the Reserves and Seniors matches between 1.30pm and 2.00pm and will include music from the Pipes & Drums, National Servicemen's Memorial Band.

The Reserve Grade will play at 12.00pm followed by the Seniors at 2.00pm and the day will culminate with the QFAW playing at 4.45pm.