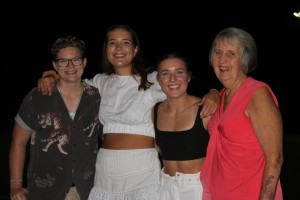 The inaugural Mayne Tigers Women’s team will tap into the rich history of the club with the team engaging much loved and respected Life Member Glenda Barber as the team’s matriarch. Glenda’s father Vince Ryan and uncle Clem were members of the Tigers first Premiership team in 1927.

The Barber family has been synonymous with the Mayne Tigers for over 70 years with Glenda and husband Rod both taking on endless roles for the club as individuals and as a dynamic duo to this day.

The Women’s team’s inaugural Coach Wayne Mahoney made this announcement last night at the Tigers Season Launch along with the announcement of the group’s first leadership group. Paige Weddell will be the team’s first Captain and she will be joined by Emily Bowden and Brooke Restall as Vice Captains.

The club is very excited about this new team who will play almost all of their home games following the Men’s Senior team at the Den. Senior Coach Josh Duffy expressed his delight and excitement regarding the support coming from the entire playing group about this new team and the commitment to be their number one supporters.