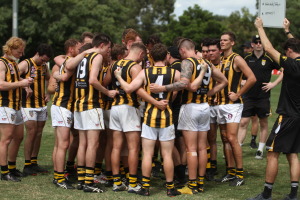 The Tigers Senior group have now had two encouraging hitouts with the coaching staff very pleased with progress to date.

The team travelled to Hervey Bay two weeks ago to take on the undefeated Yeppoon Swans coming away with the win in a very entertaining game at the Hervey Bay Bombers home ground to get the year underway.

The Tigers took on old rivals the Wilston Grange Gorillas yesterday at Hickey Park in the Seniors and Reserves in sweltering conditions with an extended bench in both grades providing plenty of opportunity for the coaching staff to have a good look at the new recruits and some up and coming cubs.

There was plenty to like about the senior group with the Tigers showing very good signs at all parts of the ground.

The experienced stalwarts like Caleb Brown and Dean Hartley did enough to show that they will once again exert their normal influence this year before they got an early mark while warhorse Sam Paterson was his usual courageous self in the last line of defence.

Young gun Jack Coghlan was very energetic around the ground whether it was in and under or even with some huge leaping marks, the diminutive midfielder showing he will be an influential player for the Tigers this year. Zac Quin got plenty of the pill as usual yesterday with the Tigers looking most dangerous when he was around the stoppages.

The Tigers regular big men were left in the shed for the moment providing an opportunity for young guns Jack Walsh and Gus Shaw to get some experience in the first grade and they didn’t disappoint evidencing some pleasing depth for the long season ahead.’

Up forward, new recruit Cameron Perkins was busy providing a strong focal point for the Tigers in what shapes as an exciting new forward line setup.

The Tigers led all day until the last ten minutes when the Gorillas just managed to nose in front but the Tigers did all they needed to do to show that they have plenty of ammunition for the season ahead in a very successful outing.

The Reserves depth is extraordinary with an extensive range of experience and youth. They played the Gorillas development mix in a fairly even contest across the day with both sides trying out a range of setups making the most of the game.

The Tigers welcome back popular Premiership player Gabe Dillon and he wasted no time in showing his wares to the coaching staff while the usual strong performers in Stew Settle, Nick Holleran and Danny Evans did all they needed to do to show they will be important players for 2021.

Tim Lyons has got bigger and stronger in the off season and used his size to good effect while former Thirds ruckman Nelson Daugalis was very good for the Reserves.

The Tigers take on the Springwood Pumas next Saturday at the Den.