Training off to a big start for the New Year 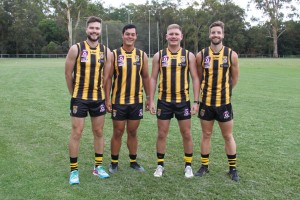 Training was back in full swing this week for the Pre-Season with an extremely good turnout for all grades. The Men’s teams are training as one group at this stage concentrating on a range of skills, endurance, strength and conditioning.

The Pre-Season will run for another six weeks with the first practice match for the seniors scheduled for the 6th March against the Yeppoon Swans in Hervey Bay. The Swans approached the Tigers looking for a hit out against a Brisbane club after their extraordinary success in recent years with five consecutive premierships in the Rockhampton competition. The game will be hosted in Hervey Bay with an opportunity for both clubs to meet somewhere akin to half way.

The Tigers lineup at this stage is on track to be equally competitive as 2020 with the majority of the playing group returning for another season.

The group will once again have a flavour of experience and youth with the evergreen Caleb Brown looking just as fit as ever while his cousin and four times club champion Jack Collings is tearing up the track as usual.

The club is pleased to report that 2020 Best and Fairest Runner Up Jasper Craven and big man Jamie Ivers are in training with the Aspley Hornets VFL side for the newly minted competition for 2021. The Tigers will be following their progress closely and wishing them every success.

In other news Duncanson Todd Medallist for 2021 Marcus Dyson is back on the track and looking forward to another big season for the Tigers while the 2020 Highest Goal Kicker for the League Zac McLean is looking stronger than ever making the most of the off season.

The depth of youth in training is exceptional as previously reported with young guns Zac Quin, Tom Eccleston, Gus Shaw and Haydn Peterson at the forefront joined by some up and comers in Ryan Doolan and Louis Quin who are exciting prospects sure to get their chance in 2021.

There are also a number of new signings which we will look forward to reporting as the weeks progress and we get closer to the season.

The Reserves will once again have a youthful flavour with the experience gained in the 2020 premiership a factor sure to play a part in the new season. Coach Corey Massingham will continue his role as playing coach developing this exciting group of young men for the future.