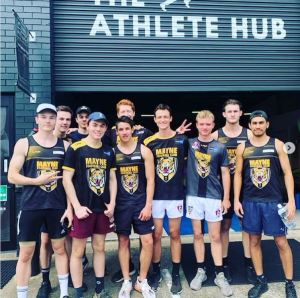 Training returned at a pace with Head Coach Josh Duffy running a two week programme for the young and emerging Tigers under 22 years of age before the full squad returned to the track last week.

A group of over thirty enthusiastic young men took advantage of this programme weighted heavily to skill development and game sense. Club Captain Jack Collings set the bar for the young Tigers to follow during the programme.

Coach Duffy was particularly impressed with the effort of young gun 16 year old Haydn Petersen who jumped out of the blocks in 2020 to play in the Reserve Grade Premiership team while former Mayne Junior Louis Quin, younger brother to 2019 Rising Star Zac joins the squad and is showing already that he has plenty of what it takes. 2020 Everton Award Winner and another former Mayne Junior Tom Eccleston was also at the front of the pack in further evidence that there is plenty of local talent in the squad to take the Tigers forward for many years to come.

It was very pleasing to see the Everton Wolves also making the most of the early training sessions with 15 Year old Rhys Syrett leading the way in his second senior pre-season.

The full squad returned to training last week with the very notable return of former Everton Wolf and Mayne Tigers Premiership player Henry Leong to the club after several years in the QAFL. Leong will add plenty of class and experience to the Tigers 2021 campaign.

Over fifty players sweated it out this week in steamy conditions with the focus once again on fitness, strength and conditioning. The squad will hit the gym together as well over the next week before taking a Christmas break.

In good news for the Tigers, retention has been very good adding to the excitement and determination to go one better after just falling short in the Senior Grand Final this year.

The Reserves will once again be stocked full of youth with over 50 percent of the squad under 22. The experience gained this year with another premiership adds to the growing confidence in the group setting the scene for another big year.

The Thirds, not noted for their Pre-Christmas attendance were well represented after another very good Season. Run on positions were hotly contested in the Friday night space this year as the competition continues to go from strength to strength. The word is that all clubs continue to gain more talent so the Tigers will need to be up for a challenge again. All players will need to work hard to earn their spots again in 2021.

The Tigers received their Provisional Licence to put together a team in the QFAW Division 2 North competition which enabled the club to commence recruiting. The club needs to put together a minimum squad of 25 players by mid February 2021 to receive a full licence to participate.

The club was very pleased to have Wayne Mahoney agree to take on the coaching role of the new team. Wayne has extensive experience as a player, coach and umpire over many years. He has been the Everton Wolves under 17 Girls coach for the last three years. He is also a qualified Tae Kwan Do Referee.

The Squad has had three training sessions now with very good attendance and significant numbers on the prospect list. It is hoped that a good number of Everton and Mayne Juniors will join this player pathway now and in the years to come as has been the case in the Men’s space.

The team will hold their last training session this Tuesday Night followed by a breakup BBQ with the Men’s Squad and look forward to a strong Pre-Season commencing on the 19th January 2021.

The Tigers are very pleased to offer Colts again in 2021 with the graduation of a solid group of players from the Everton Wolves and some returning Mayne Juniors to form the nucleus of the team.

Long term and well known Mayne Coach and Umpire Lee Holleran is excited to take control of the Colts for 2021 and is very pleased to see the talent coming through.

All players of eligible age being under 18 and a half at the 1st January 2021 are encouraged to join in the club’s first pre-Christmas training sessions on now at the Den from 6pm.

The club held a Young Guns Session on the 8th December 2020 at the Den for interested players and their parents, both boys and girls who are looking to play for the Tigers in 2021. A big thanks goes to players and coaches Zac McLean, Jasper Craven, Zac Quin, Jack Collings, Corey Massingham and Josh Duffy as well as Club Physio Sami Howell who gave up their time to either present to the group or were an integral part of the evenings event.

As always, numbers are critical to get into the system so Player Registration is now open at Mayne Registration Form