A Mixed Week for the Mayne Tigers 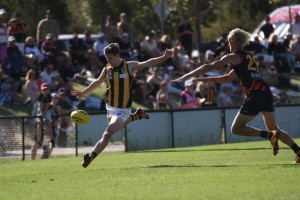 The Tigers experienced the highs and lows of football yesterday with a great win for the Reserves in the early game over arch rivals the Noosa Tigers but their old foe got the better of them in the main event at Moreton Bay Sports Complex in a very big day for both clubs.

The Tigers went into the main game having lost two of their prime movers for 2020 with newly crowned Duncanson Todd Medallist Marcus Dyson ruled out with a significant ankle injury and Runner Up League Leading Goal Kicker Jamie Ivers out with a torn knee ligament, both injuries legacy of the Semi Final last week. While the Tigers were still full of talent and experience it was always going to take a full list to knock off the unbeaten Noosa outfit who had strength and speed right across the park.

The first quarter was played at cracking pace with both sides evenly matched with the Mayne Tigers drawing first blood with two quick goals and a third shortly after with Jasper Craven and Zac McLean taking the game on in these early moments.

The Noosa Tigers steadied the ship with goals to Brain, Pettigrove and Harper to make the game evenly poised at the first break in what was shaping as a classic grand final.

However it was all Noosa in the second term as they exerted their strength and class on the game to kick away with four unanswered gaols. It was their precision by hand and foot that hurt the Mayne side most as they moved the ball around the ground with class not previously seen in the last two encounters between these two sides. It would seem that the drawn game in Round nine between the two Tigers outfits unlocked the beast.

The Tigers old hands in Caleb Brown and Jack Collings did all they could to arrest the momentum but the Noosa Tigers had too many strong performers all around the ground. Brown took some classic marks and came in for some heavy treatment at times but he was a stand out for the Mayne side.

The Tigers Jasper Craven played his heart out all day with another outstanding running game as he tried to get the machine going while his good mate Jack Coghlan gave it his all in the front half.

The Tigers went into the main break down but not out and with plenty to play for and with an abundance of experience and belief were never going to let the game get away from them voluntarily.

The third quarter is habitually called the premiership quarter and for good reason. While the Mayne side’s efforts could never be called into question, the Noosa Tigers were impressive kicking four goals and but for some very inaccurate kicking could have made the scoreline much worse than it turned out to be recording a further eight points.

The Tigers backline worked overtime with Dean Hartley courageous as always while Adam Mueller was a standout with his high marking and spoiling once again a feature.

Seb Windsor was also elusive and impressive as he did his best to generate some forward thrust out of defence.

The Mayne side did all they could to stem the tide never giving in for one minute as they fought the game out to the last in a brave display against a very good side.

In the end the dominant team of the last two years recorded a strong win to take out the QFA Division 1 Premiership for the second year in a row.

The Tigers will be pleased however with their season which was dominated by interruptions for COVID and the extensive restrictions and protocols placed on footy during this extraordinary year.

A great credit goes to Josh Duffy and his coaching staff in Neville Miller and Bill Stephens for their wonderful work in keeping the group focussed through the down period and then up and going for a compressed but no less exciting year.

Credit also goes to AFL Queensland for their efforts in keeping the season going under incredible stress and with skeleton staff due to the financial impact of the virus. A big thanks in particular to Barry Gibson and Leigh Harding for their work and collaboration with all clubs during this time.

We will now wait to see what happens next with extensive changes to Queensland football at all levels expected following the removal of the NEAFL competition for 2021. AFL Queensland will be working overtime to put together revised structures in their own house as well as for community football over the next few weeks.