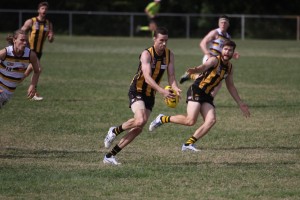 The Mayne Tigers booked their spot in the 2020 QFA Division 1 Grand Final yesterday with a win over local rivals Aspley Hornets in a home semi final at the Den.

While the Tigers had accounted for the Hornets in their two previous encounters this season, they were brimming with talent once again and could not be taken lightly in this all important sudden death final.

The Tigers were all over the much fancied Hornets for the entire first half but couldn’t put them away in the second as the game came to an enthralling finish in a race to the end.

It was certainly a game of two halves with the Tigers getting away to a strong start with Jasper Craven kicking a rovers goal to ignite the home side. Evergreen Champion Caleb Brown was at his best yesterday whether up forward or in the midfield as he used his leadership presence to maximum effect to propel the Tigers into the big game next week.

Zac Quin was once again exciting as he also chipped in for the Tigers third goal of the first term before the Hornets Rhiley Owens got a late one over the back to slow the Tigers increasing momentum.

It was all Tigers though in the second term as they piled on five unanswered goals to take what looked like an unassailable seven goal lead at the main break.

The defensive group led by Dean Hartley and Adam Mueller were impenetrable to this point with Ryan Eyles spoiling work a feature once again.

Jamie Ivers was flying high up front as was Luke Faulkner who took some strong marks under immense checking pressure to give the Tigers plenty of dangerous options.

The experienced Aspley group came out after the main break very chirpy though with a view that the game was far from lost.

A quick goal to Nicholas Sculphur got them up and going straight away but the Tigers Jack Coghlan responded in equal time to maintain the margin however the scoreboard ticked over more effectively for the Hornets from then on.

While the Hornets were kicking goals from everywhere seemingly unable to miss, the Tigers lost their radar to record an equal amount of points as the margin was whittled down to twenty seven points at the last break.

It was still no time for alarm but the Tigers needed to straighten up to arrest the Hornets run and rising confidence.

Dan Schmidt did a power of work in the ruck for the Tigers all day as well as around the ground in a strong perfromance while the Skipper Jack Collings was busy in the clinches as usual doing his best to get the Tigers going out of the middle.

The Hornets continued on their way in the last quarter with never a miss while the Tigers still couldn’t put the game to bed despite plenty of opportunity.

While the Hornets continued to close the gap an opportunist goal to Zac Quin gave the Tigers some handy breathing space.

In the end the Tigers held the Hornets out to win by twelve points in an exciting finish to set the scene for the Grand Final next week against the Noosa Tigers at Burpengary next week.

The Mayne Tigers will be looking for plenty of supporters make the trip to cheer them on next week.