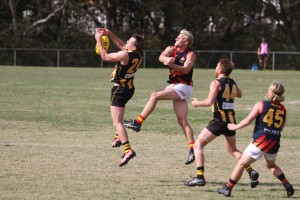 It was a fitting end for the two best teams of the 2020 Home and Away season yesterday with the Mayne Tigers and Noosa Tigers locked up with a draw setting the scene for a cracking finals series.

The Den was pumping with the roar of the Reunion Day crowd as the Mayne boys rallied to pull back a twenty point deficit from the ten minute mark of the final term to claim a draw.

It was a battle royale for the entire day with no more than a ten points margin separating the wo teams which the locals enjoyed briefly in the second quarter and with only two points separating them at the last break, it seemed like it would be a photo finish.

The Noosa men however jumped the Mayne side with three stunning majors in a few minutes of the last quarter to take what looked like an unassailable lead and a danger of running away with the game. Diminutive excitement machine Will O’Dwyer set the Noosa fans alight with two running goals to turn the game on its head,

It was long from over though as the Mayne veteran Luke Faulkner was finally rewarded with a goal after a tough day with Riley O’Dwyer to change the momentum. Zac McLean marked and goaled for Mayne to reduce the margin to seven points but once again Noosa responded with a goal to Jai Fitzpatrick with the lead seemingly secured again.

But the locals would not be denied and rallied again with a high flying mark and goal by their smallest man Jack Coghlan which amped up the emotion. A ball busting set shot from Adam Minchev then drew the teams level to close out one of the most exciting Reunion Day games for many years.

The two Tiger outfits have had some mighty games over the years and this one was certainly up there with the best as both teams eye off the finals series commencing in two weeks.

The Tigers had big contributors all over the park but games like this are built on great defence. Ryan Eyles was at his miserly best in the last line while Dean Hartley led his men’s department to perfection. Adam Mueller marked and spoiled his heart out to be a dominant force as well across the half back line.

Jamie Ivers and Dan Schmidt were once again strong in the ruck and critical around the ground with strong marking and some terrific tackles. Ivers kicked three while up forward to round out a strong performance.

Mayne skipper Jack Collings as he has done for many years took the opposition on to keep his team going forward at any cost which included a heavy collision early in the game which he shrugged off with his customary courage.

Jesse Gough dominated the flanks when helping out the defence or sprinting away into attack.

Both sides will enjoy a week off with a last round bye to be followed by a quick fire elimination round with Noosa and Mayne finishing in number 1 and 2 position respectively.

Mayne will host a final on the 19th September against the club that finishes in 3rd position after next week.