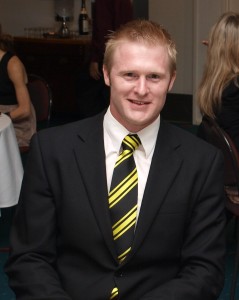 We thought it might never come but the day has arrived for the “Mightiest Tiger” Andrew Housego to hang up the boots.

It is almost impossible to comprehend that this moment has finally been reached after so many years of the great man pushing himself through yet another gruelling season in the quest to reach the magical 300 senior games for his beloved Mayne Tigers.

Andrew will attend the 2020 Reunion Day at the Den this Saturday satisfied that he has absolutely nothing left in the tank or to be extracted from his warrior physique. It is the culmination of twenty six seasons of junior and senior football which commenced way back in 1994 as a promising fifteen year old.

Housie as he is affectionately known has played along with generations of Mayne Tigers and opposition players who can only wonder at how he has achieved such longevity while being the standard bearer for the Black and Gold for so many years.

At this time it is appropriate to reprise an article by long term friend and coach Mitch Ferguson which was penned in June 2017 when Housie broke the decades old club games record of 282 games. At that time, he had achieved all that could be possible in football, or so you might think. But the holy grail was putting the Tigers games record beyond reach and he has given it all since 2017 to get to that mark.

In a postscript to the 2017 article; over the last three years of this wonderful story of hardships and triumphs Housie has helped the Mayne Reserves to a premiership in 2019 while he battled a debilitating knee complaint, played a further 11 games in the seniors and in 2020 battled through 3 games of Friday night footy in the Thirds before his time worn knee finally told him it was enough. He quipped at the time that he didn’t ever think it would all come to an end in a Thirds game on a cold August night at Jimboomba. It was time.

The story continues for Housie as the Mayne Under 10 Coach and Mentor for his son Spencer and a host of other lucky boys who can only marvel at their fortune of having a Tiger Great of this stature inspiring their footy future.

Come along on Saturday to the Den and share the moment with Housie as he says farewell to senior footy. He will wave farewell to the Seniors, Reserves and Tiger faithful between the two games at 2.00pm.

In the meantime, enjoy the following personal story by Mitch Ferguson from 2017 below.

Seldom beaten, Housie to become the mightiest Tiger of all

In a career that has spanned 24 years at senior level of football in Brisbane, Andrew Housego (or Housie as he is affectionately known) has achieved all there is to have achieved on a personal level at the Mayne Tigers AFC. This includes a record 4 club champion awards (an honour he shares with club legend Carl Herbert), the Mick Nolan players’ player award, record goal kicking honours, league best and fairest awards and of course multiple editions of “the biggest hit of the year”   Nevertheless, it is the occasion this weekend when he breaks the games played record set in the 1930s by the indefatigable Albert Hadwen (281 games) that Housie will look back fondly on.

The journey to the almost unfathomable mark of 282 senior games at the one club has been one littered with the highest of highs and all too frequent lows, more than perhaps any footballer could imagine. Housie credits his mum, life member Margaret, in making it all possible.

“without her, I never would have had the privilege of representing this great club…driving me 45 minutes to and from training, 2 nights a week as a 15 year old, until I was old enough to make my own way…she has been my greatest and most one-eyed supporter”

As he reflects on a career that began in the old QAFL, against traditional foes in Morningside, Sandgate and Grange, playing alongside hundreds of players and under more coaches than the Greyhound bus company, Andrew manages to pinpoint the turning point in the clubs fortunes, which inevitably extended his playing career long enough to challenge the record mark.

“The day the coach (Mitch Ferguson) recruited Shaun Daly. Shaun had an uncompromising attitude (not unlike Corey Lynch, Housie’s captain as a rookie) and belief in his ability as a player and coach. It was infectious and certainly left everyone clear on the level of commitment to the task required. He instilled a belief in the group which on reflection was probably the missing ingredient in the year or two prior, when we were assembling a good list.”

“It didn’t seem long ago that I was considering retirement and the reality of ending my footballing life without a cherished premiership medal. Now 3 and a bit years later and I’ve experienced the euphoria of 3 grand final successes and the opportunity to finish with a 4th”

Typically, Housie’s thoughts of the good times is of his team mates who missed out, those players whose time at Mayne was typified by a lack of success, heartbreak and pain.

“I think back to the guys who kept the club going, who unfortunately finished up before we enjoyed premiership success…”

Included in this group is younger brother Glen – who played alongside Housie in the early 2000s. It brought a smile to Housie’s face to think that Caleb Brown and Luke Ferguson, two players that he shared the field with the most times, did receive premierships medals.

To maintain this level of persistence and commitment requires an enormous amount of loyalty to the club. Housie insists that he felt a sense of duty to the Mighty Mayne Tigers throughout the entire 24 year period. When questioned as to whether the journey has an end point, he reminds me of the ice packs adorning his body at the start of each week now as a sign that father time may be tapping / thumping him on the shoulder. Nevertheless, in true Housie spirit he is enthused about an upcoming mid - season freshen up as a potential pointer to more footy ahead

“Jode, the kids and I are headed to Sri Lanka for a few weeks where I will hopefully find a magic elixir that will re-energise my body, or at the very least fix my dodgy hammies, I think it’s called the fountain of youth?!”

Could it be that the great man will rediscover the touch that saw him boot 10 big ones on a few occasions? He rates the bag of ten against Burleigh at home in a losing side as the best he has played. On that occasion he unloaded a few long bombs from outside fifty and hints that he has been working on a new goal kicking routine (version 38 apparently!) that will entertain the crowd on hand this weekend.

One thing is for certain on Saturday – whilst there will be Garth Brooks on the radio heading to the game from his new abode in Eatons Hill, the family won’t be squeezed into the trusty Ford Festiva but rather the family Toyota Prado mobile.

The clicks in the ankles, knees and shoulders will be drowned out by the big crowd on hand or likely Housie himself as he wills his team mates to the contest, fires a friendly request at the umpire for a free kick or hopefully a classic bone rattling tackle from him on his hapless opponent.

Amongst the crowd, Housie will, by habit formed over decades now, scan the crowd for his family

“Jodie understands and supports unwaveringly, my love for the game and this club…I thank her wholeheartedly”

He has particular admiration for the “off-field warriors of the club”, the people who have worked tirelessly and sacrificed so much for love of this club over the years…I’m so grateful to them for their passion and dedication in keeping this club alive and allowing me to enjoy so many memories”

“I’m honoured to have played alongside some incredible footballers and men, many whom I’ll be friends for life. This club is built on character of great people and I hope I’ve done it justice”

There will no doubt be a poignant moment shared by Housie and his immediate family as they reflect on the marvellous journey to this point in the juncture, as thoughts turn to those close to him that won’t be in attendance, having passed away some years ago

“I’d like to acknowledge two men who I think would be equally proud of this achievement and who’d loved to have witnessed it themselves, my dad Leo and my father-in-law Murdoch Campbell.”