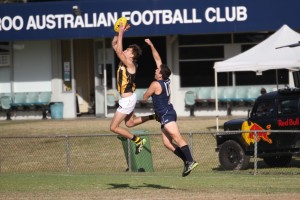 The Tigers got off to an absolute bolter yesterday in their penultimate home and away round against the Coorparoo Kings at Giffin Park. The Kings had no answer for the red hot Tigers as they kicked off to a thirty one point lead at the first break.

The Tigers were well aware that they had not performed well at this venue since the old rivalry between Coorparoo and Mayne was revived back in 2017 and they needed to rectify that issue especially with the finals looming large in the next few weeks.

After an extraordinary win last week against UQ, the Tigers were looking for a tougher contest this week against the old foe but such was their emotion in the first stanza, they gave the Kings little chance to get on the board.

The Tigers centre clearances swept them to countless forward fifty entries thanks to Dan Schmidt’s ruck dominance and the efficiency of Marcus Dyson and Jack Collings.

The Kings had no answer for Jamie Ivers who was unstoppable in the air thanks to the quick entries while Zac McLean also continued on his way from last week’s big performance. Ivers went on to kick seven goals for the day in his biggest haul for club while McLean bagged another three for his efforts.

The Tigers were relentless in the second quarter kicking away with a further four goals while the shocked Kings could only manage one for the half in a rare effort tor them.

The Tigers backline held strong with Dean Hartley and Ryan Eyles spoiling and marking in clinical fashion to keep the margin at bay.

The question at the main break was certainly could the Tigers maintain the momentum against the Kings who are a much better side than the scoreline indicated.

While the Tigers had dominated the game for the first half, they were very aware that the Kings would not let the game just slip away from them without a fight. The third quarter was a much more even affair as the Kings reshuffled their group with Mitchell Enright coming into the game while Brandyn Grenfell pushed his big body to all points of the ground to get his side going.

While the Tigers won the third term, it was by a slim margin with both sides kicking four goals. The Tigers Jasper Craven and Jack Coghlan were busy again while Caleb Brown used his experience to maximum effect when the challenge was made.

The Tigers had retained their eight goal margin to the last break after a strong challenge from the Kings during the third term but it would take a big effort to change the result from this point.

In the end the Kings finished the game off well but they were never going to threaten the result with the Tigers running out solid winners.

The scene is now set for a top of the table clash with Noosa for the Reunion Day next week at the Den which shapes as a cracker not to be missed.