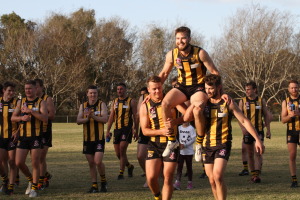 The Tigers were pumped up for the 100 game celebrations for key forward Zac McLean yesterday at the Den with the UQ Red Lions paying a huge toll for the energy and emotion of the day.

Zac McLean has been a vital part of the Tigers recent history with three premierships and a club champion award in the trophy cabinet at the ripe old age of twenty four but he is just coming into his most productive time. McLean celebrated his milestone game with a best on ground performance collecting six goals along the way to dominate the Red Lions.

A rampaging eight goal quarter into the wind with three from the milestone man kicked got the Tigers off to an unassailable position with the Red Lions only able to record one major, their only one for the day.

The Tigers were so dominant that the ball rarely ventured into their defensive half while the forwards lined up to feast on the midfield dominance. Jack Gartlan and Jack Coghlan lined up for two apiece while Jamie Ivers hit the board as well while up forward.

The Tigers midfield fast men in Jasper Craven and Jesse Gough ran rampant all day to leave the struggling students in their wake while wrecking ball Marcus Dyson cleared the way consistently once again with some bruising collisions and tackles.

The Tigers comprehensively completed each quarter in clinical fashion sticking to their structure to ensure they didn’t get carried away with their significant possession count in a healthy sign which the coaches were most pleased about.

While the swirling wind and dusty conditions could have been a factor, the Tigers methodically worked themselves into good position to amass a large total. In another good sign they finished the game with a six goal final quarter in the same fashion as they started.

Zac Quin was busy once again accumulating significant possessions at critical times to keep the Tigers on track while Jack Coghlan was very dangerous around the goals in the small forward role kicking three for the day to have all the forwards on the board once again.

The backline when called upon were impenetrable with Adam Mueller taking some signature marks while Seb Windsor and Jordan Morrison were equally miserly.

In the end it was a big percentage boosting win for the home side which will be very handy with only two games and a final round bye to come.

The Tigers venture to Coorparoo next week in another important game in the context of the shortened season.