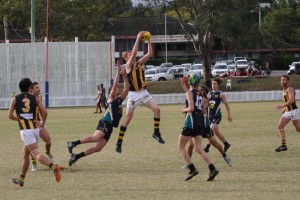 The Tigers travelled to Beenleigh to take on the Buffaloes for the first time ever in a much anticipated game. The Buffaloes were promoted to Division 1 this year on the back of consistent top of the table results in Division 2 over a number of years and it was clear from their results in the brief 2020 season so far that they were going to be a challenge. The Buffaloes pushed ladder leaders Noosa all the way last week so the Mayne coaching group were certainly wary of the new boys on the block.

It was no surprise that the locals came out firing in the first quarter with some very direct football to take advantage of a strong northerly breeze which had sprung up following a huge downpour in the early game.

The Buffaloes had recruited well for their elevation into the higher division with former St Kilda and Glenelg star Brodie Murdoch making a strong impact on the game early with his penetrating kick and organisational play. The Tigers meanwhile were struggling to break free of the energetic tackling from the lively Buffaloes who were relishing the chance to take on the higher competition.

The Buffaloes took a one goal lead at the end of the first term holding the Tigers to one major and setting the scene for another entertaining game in this shortened season.

Dauth Park has plenty of wide open spaces for an open game and the second quarter was the complete opposite of the tightly contested first as both sides found more room to move as they spread the ball and scored more freely. The Tigers took a more direct approach with Zac Quin getting some clear breaks on the back of some effective ruckwork from Jamie Ivers to in turn kick three goals in five minutes and open up a handy lead.

The Tigers smalls Jasper Craven and Jack Coghlan kicked the first two in sharp fashion followed by a ballbuster from Zac McLean around the corner style. It looked like the Tigers would run away with the game but there was no way the Buffaloes were going to take things lying down as they kicked a steadier to stay in touch with the Tigers. The Tigers finished the quarter as it started with Zac Quin kicking two goals for a seven goal quarter. To the Buffaloes credit they put on four making for a very exciting free flowing term of football.

The Tigers backline defended grimly all day with Sam Paterson again a standout while Adam Mueller flew high and even pushed forward for a critical goal as the third quarter saw them extend their lead. Zac MacLean kicked three goals for the third week in a row in another impressive performance while Jack Collings was the link man as usual in getting the Tigers going forward.

In the ruck, Dan Schmidt and Jamie Ivers controlled the middle and were dangerous when up forward while Marcus Dyson was once again ferocious in his tackling.

The Tigers never really shook off the Buffaloes even though they recorded a six goal win. The Tigers dominated the last quarter with an abundance of forward fifties peppering the goals with six points but only one major. It was notable how impressive the Beenleigh defence fought out the game with Jack James a standout with some strong marks and timely spoiling work.

It is back to the Den this coming week to take on the University of Queensland in another must win game as the Tigers look to host a home final if they can maintain a top two spot.