Tigers on repeat against Hornets 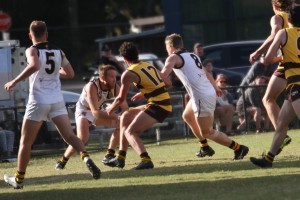 In another quirk of the 2020 shortened season draw the Tigers came up against the Aspley Hornets for the second time in five rounds. While the venue was different, the result was a repeat performance as the Tigers shrugged off a gritty Hornets outfit to kick away with a comprehensive ten goal win at Graham Road yesterday.

The shortened season is playing havoc with most teams as injury lists mount and they each scramble to fill positions. Both the Hornets and the Tigers looked a little different to the teams that played off just a few weeks ago. The Hornets were without some of their highly credentialled stars with Aaron Young, Declan Watson and Jame Nelis notably missing from their Round 1 team but the Tigers were also in change mode. Thankfully the depth of players is holding the club in good stead for now as the Tigers move to the second half of the season next week.

It was clear from the outset that the Hornets were going to try to keep the game hard and close with the first quarter a real scrap with neither side able to get any clear air. The tight quarters of Graham Road suited the home side as they bottled the game up at every opportunity. The only major came at the latter part of the quarter when a high marking Zac Quin pulled down a pack mark in the goal square which he duly converted. The Tigers took a four point lead at the first break which they never surrendered.

The mercurial Quin started the Tigers off again in the second term with two more goals to open a handy lead as the game started to gradually move into stride. The Tigers were starting to get more clean football in the middle but were spending too much time sharing it around before making the crucial forward entries which their dangerous forwards could take most advantage.

A hallmark of the Tigers success over recent years has been their reliable defence. Veteran Sam Paterson was at his courageous best yesterday as he led the way in the men’s department to keep the Hornets to just one major for the first half. The combination of Dean Hartley and Seb Windsor was also a feature of the Tigers miserly defence yesterday.

The Tigers gradually accumulated more pain on the Hornets in the third quarter kicking into a slight breeze to record another four goal term with Luke Faulkner taking a vintage goal square mark and goal a highlight.

The Tigers midfield was once again ably led by Jack Collings as he marshalled his troops to perfection. Adam Minchev was bustling and strong achieving numerous clearances while Jesse Gough and Jasper Craven got plenty of the ball to keep the Tigers running forward.

Big men Jamie Ivers and Dan Schmidt were dangerous whether in the ruck or up forward to give the Tigers plenty of possession in two strong performances.

The Tigers came to the last break with their tails well up and a need to finish the game off strongly. They duly kicked away to a handy win with all the forwards getting their share of the action in what was an important win in the context of the quick fire season.

The Tigers travel to Beenleigh next week to meet the Buffaloes for the first time ever in what looks like another exciting game.