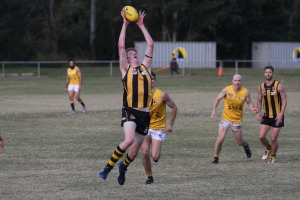 It was another extraordinary week in this extraordinary year with the southside of Brisbane put into panic mode due to COVID notifications. The Springwood Pumas were unable to train on Thursday night with football facing another potential setback but thankfully the game went on at the Den and it was a beauty.

Despite their difficulties, the Pumas jumped the Tigers with two quick goals to get the game off to a cracking start before Zac Quin kicked the Tigers opening goal. The quarter continued at a frenetic pace in a shootout as each side went goal for goal. Jamie Ivers kicked truly with two handy goals leaving the game set for excitement at the first break with just a three point advantage to the Pumas.

The Pumas Josh Brown was proving a handful for the Tigers backline with three of their four first quarter goals as he used his pace to maximum advantage.

The second term was more of the same after Jack Gartlan got the Tigers off to a good start with two goals while each side contested fiercely through the middle with Jack Collings in an enthralling battle with Pumas star Rowan Page.

The Tigers midfield were well served by a bustling effort from Adam Minchev and the experience of Caleb Brown when he wasn’t directing traffic in the forward line. The quarter appeared all locked up at thirty nine apiece before Springwood’s Bailey Forge launched a long bomb to kick a goal on the siren.

It was a fascinating game to the main break as the Pumas went in full of confidence with a six point advantage and their tails well in the air. However it was the Tigers who came out after the oranges to extinguish the hopes of their feline rivals with a seven goal to two quarter in a comprehensive effort. Zac McLean showed plenty of his renowned prowess with two clever goals while his namesake Zac Quin also added to his tally. Brown, Troy Hammond and Nick Holleran all hit the scoreboard to share the impact across all the forwards and break the spirit of the Pumas.

It was seemingly over at the last break but the Pumas came out with two quick goals to let the Tigers know they weren’t going to lie down.

It took the Tigers until halfway through the quarter to steady the ship again with a goal to Jamie Ivers followed by two quick ones from speedster Jasper Craven to silence the fightback.

It was a satisfying win for the Tigers as they move into second place on the ladder in a tight contest for a finals berth in the shortened season with every win a critical step in the process.

The Tigers take on Aspley again for their fourth game in the eight game season. They will play the well credentialled Hornets at Graham Road next week in another must win game.