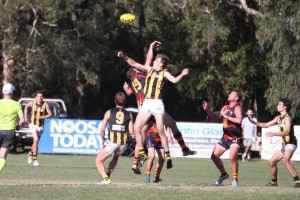 The Mayne Tigers took on reigning Premiers Noosa yesterday at Weyba Road in what shaped as a classic battle for Round 2 in the Hart Sport Cup.

The competition heavyweight local team are brimming with big names and big bodies but the Mayne Tigers weren’t fazed after a thrilling Round 1 win over the classy Hornets.

It was all pace and daring in the opening minutes as the locals showed plenty of dash and skill in perfect conditions for footy but they squandered a few opportunities to get the scoreboard ticking over while the Mayne side took their opportunities thanks to some gritty tackling and composure under enormous pressure. The Mayne side went to the first break with a three point lead thanks to some terrific defence led by Dean Hartley and with terrific courage from Mitch Bruce while up forward a couple of handy goals to Jordan Morrison against the wind was just what was required.

The visiting Tigers dominated the scoreboard in the second term with three goals despite the locals once again showing plenty of dash to pepper the behinds and not record a major. It was however a very tight and exciting period with both sides showing their skills.

The Mayne side had plenty to like about them with Zac Quin once again showing his pace and evasive skills to give his team plenty of spark while Skipper Jack Collings was in the clinches getting plenty of possession as usual.

Caleb Brown was busy but under plenty of pressure. It was the Noosa mosquito fleet who looked the most dangerous for the locals with Jai Fitzpatrick and Will O’Dwyer getting under the tackles of the desperate Mayne Tigers while Maverick Pettigrew was everywhere.

The Mayne Tigers held a three goal lead at the main break with the Noosa team once again paying the price for inaccurate kicking.

The significant amount of possession that the Noosa team were accumulating was to take its’ toll in the second half as they kicked with the breeze in the premiership quarter in a dominant display with four goals but with another eight points which could have closed the game out. However the Mayne side were desperate in defence as usual to keep the pressure on such that there was still plenty left in the enthralling contest.

The Tigers tall men Jamie Ivers and Dan Schmidt were giving everything beyond their tender years to give their team every chance as the side entered the last term with Coach Duffy’s words ringing in their ears to kick long to create a downfield contest.

It was a seesawing last term but the local side slipped away to a conclusive lead as they finally adjusted their radar to record four goals to two and shut the game down and record a seventeen point win.

There was plenty to feel good about for the Mayne side though with two of their stars from Round 1 in Luke Faulkner and Adam Mueller unavailable for the tough road trip clash.

The Tigers will enjoy a much needed bye this week after two very tough encounters as they rest up to take on an unbeaten Springwood at the Den on the 1st August.