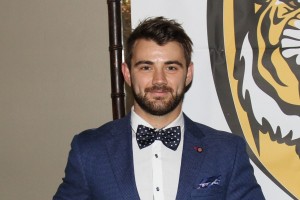 One of the Mayne Tigers most decorated players of the last ten years, Danny Evans, plays his 100th Reserve Grade game this Saturday against perennial rivals Noosa at Noosa. The humble and unassuming centreman has also accumulated 50 senior games during his extensive service for the Tigers, but amazingly it nearly didn’t happen.

In typical fashion, Danny reflected this week that he only came to the Tigers as a result of his older brother Matt, who was making his way as a young running player in the senior team. Matt was very driven to forge a senior career at the Tigers, but Danny wasn’t really sure that footy was going to play a big part in his life.

After two years at the Tigers playing in the Colts side without much inspiration, Danny was lined up by his older sibling who provided a clear plan on what was required to get his footy on track. Whatever he actually said, it certainly made a difference. In 2010, Danny was in his final year of colts and it was to become the season that awoke the inner footballer in him. An extraordinary transformation led to immediate success as he won the Runner Up Best and Fairest for the Colts and at the same time made his debut in the Reserves along with several other young emerging players who were just what the club was seeking at the time.

Danny has always credited Matt as the player who has had the most influence on his football but it was clearly this mentoring at the beginning of 2010 that set the script for the amazing story that unfolded over the next ten years.

Despite all of this success he remains the same quietly spoken polite young man he has always been, but there is an inner resolve which has grown within him that provides the drive to rise to the biggest of challenges.

Always one to recognise those around him, he recalled how in the formative days of his football, in addition to brother Matt, it was friends like Corey Massingham, Tom Falconer and Michael Sneesby who were young men playing senior football as teenagers at the time who also provided the inspiration for him to work harder.

After securing a regular spot in the Reserves, it was team leaders Tom Ditchburn, Christian Rollman and Jarad Marsh who created a nurturing and positive environment which made the game fun despite the lack of great success at the time. He was also quick to acknowledge how welcoming and influential senior players like Caleb Brown and Jimmy Gillett were in providing mentoring and guidance for him.

He also acknowledges that it is this positive cultural environment that has shaped him to be the person and player he is today, and is in turn very proud to now be able to share his extensive experience with younger players coming through the ranks today.

While Danny has also played 50 senior games, it is likely that in a different era where the club wasn’t so well stocked with midfield talent, he would certainly have made more appearances at the higher level.

When pressed for his favourite experience at the Tigers, he cited the 2014 year where the club assembled one of its most decorated group of mentors to lead the football department with Ovens and Murray star Shaun Daly coaching the seniors, supported by the highly experienced Danny Craven as Director of Football, Shane Johnson as Assistant Senior Coach and Nev “Nifty” Miller as the Reserves Coach. He recalls it being a year where the season was planned to precision, the club swelled with new exciting talent and it all came together on the most important day with both senior teams achieving a long awaited Premiership.

In wrapping up our very pleasant session, I asked Danny if there was anything else he wanted to add. It was no surprise that he wanted to acknowledge his mum and dad, Ann Maree and Ian who have been his greatest supporters who have barely missed a game that he has played.

It will be a tight band of Tigers’ officials and supporters, including Ann Maree and Ian and the Evans clan who will be there on Saturday to cheer Danny on for this wonderful and thoroughly deserved milestone.