Tigers take sting out of Hornets 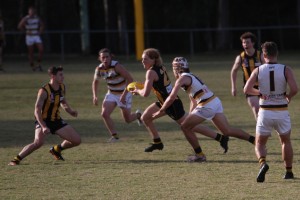 In a welcome return to footy, it was a highly anticipated local derby between a much fancied Aspley Hornets and a new look Tigers that captured the imagination of everyone with one of the largest crowds to attend the Den in years turning up to see the stars come out for both clubs.

The Hornets were chock a block full of big names with the NEAFL cancelled for 2020 while the Tigers welcomed back some well known talent of their own to set the scene for a great contest which is exactly how it unfolded at least for the first term.

The first quarter was a bruising opening with both sides glad to be out there and with plenty to prove.

The Tigers midfield was bolstered by the return of former club captain and club champion Caleb Brown who added plenty of experience and class to the contest while his cousin and current Tigers skipper Jack Collings continued with his usual courageous attack to lead his team into the fray in another strong performance for the club.

It didn’t take the Tigers goal kicking ace Luke Faulkner long to show that he hasn’t lost any of his skills since stepping away from the game in 2016 as he got off to a great start with a strong mark and goal and going on to help himself to four goals for the day in a vintage performance.

It was however new recruit Marcus Dyson, a much decorated young player from Hervey Bay, who stole the limelight in a tremendous debut for Tigers with a mountain of possession as well as some bruising tackles which rattled the Hornets.

The first quarter was a tight affair with only two points separating the two teams at the break setting up a great game.

However the Tigers broke the game open in the second term with seven straight goals leaving the Hornets goalless for the quarter with a comprehensive performance in the backline to shut out a shell shocked opposition. The Tigers defence was led by Dean Hartley and Adam Mueller in military fashion. Both were exceptional with poise and flair while they each took some crucial intercept marks to snuff out any chance of a Hornets comeback.

The Tigers shared their goals around with Troy Hammond taking some big marks while Jasper Craven and Zac Quin proved a handful for the Hornets to manage.

The Hornets NEAFL spearhead James Nelis looked dangerous early but the Tigers’ Ryan Eyles found his measure and he was unable to capitalise on the few opportunities he had due to some wayward kicking. The Hornets were well served by their star recruit in Aaron Young who showed why he was able to accumulate 100 AFL games for Port Adelaide and the Suns.

The Tigers went on to win comfortably with a five goal to two second half to round out a great day. The Tigers were also well served by big man Dan Schmidt who shouldered rucking duties for the majority of the day while Jamie Ivers was also handy while on the ball and up forward.

The Tigers hit the road to Noosa next week to take on the 2019 premiers in what shapes as another exciting game. The Noosa team also boast several of their home grown NEAFL players retuning to the fold to bolster their ranks and you can guarantee there will be a huge crowd on hand to see this one. It’s well worth the drive to see the talent on show for both teams and the Mayne Tigers would love to have plenty of support on hand.