Who is the highest goal kicker of all time for the Mayne Tigers? 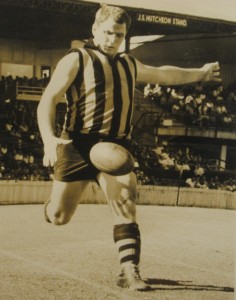 Ever wondered who the leading goal kicker in Mayne history is? We have undertaken some research of the available records (with the assistance of club historian Bob Gower) and came up with the following top 7 players. Some absolute greats on this list!

1. Barry Spring 585 goals - Barry played 165 games through the golden era of the 1960s (8 grand finals in a row for 4 premierships) as a centre half forward. Barry won the Club Champion in 1962 (a premiership year). Barry then played rugby league for Norths for a year and finished his career at Banyo where he kicked a swag of goals.

2. Dale Woodhall 537 goals - Dale was recruited by Mayne as an 18 year old in 1977 and made an immediate impact. Dale played 143 games, with arguably Dale's best year coming in 1983 when he kicked 113 goals and won the Club Champion. Dale kicked another 32 at Collingwood and 139 for West Adelaide making a total of 708 goals, an amazing record at State level.

3. Andrew Housego 457 goals - Andrew made his debut in 1996 as a 16 year old and has gone on to be the games record holder, currently on 293 senior games. 4 time premiership player (3 senior premierships, 1 reserve premiership in 2019), 4 time Club Champion and captain of the club for a record 11 years. Would have kicked many more goals in a more successful era during his prime.

5. Luke Ferguson 202 goals - Luke made his debut for the Tigers in 2001 after a short training stint with the Fremantle Dockers. Luke finished his career in 2014 after 152 games, 2014 premiership and 2003 Club Champion. One of the more entertaining players on and off-field, you never quite knew what Luke would do next.

6. Caleb Brown 184 goals - Caleb made his debut as an 18 year old in 2002 and has so far played 191 senior games. Apart from 2 seasons at centre half forward, Caleb has played the majority of his senior games as a midfielder or centre half back, so a huge effort to accumulate this tally of goals. The 3 time premiership captain and 2 time Club Champion will this season be looking to become only the 10th player in Mayne history to play 200 games.

7. Brad Johns 183 goals - started his career in 2001 and finished with 100 senior games. Consistent performer through a difficult period for the club and deadly accurate shot for goal.

If you are interested in hearing more from Barry, Dale, Andrew and Caleb, we have posted interviews with each of these great players regarding their time at Mayne on our Facebook page previously. We will post an interview with Luke Faulkner in the near future.

Both Barry and Dale are also given a profile on the AFLQ website as Hall of Fame Members, see https://www.aflq.com.au/hall-of-fame.

If you have any thoughts on other players who we may have missed and should be on the leader board, let us know!