Good start to Pre-Season for the Tigers 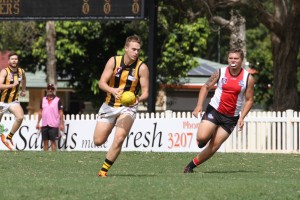 The Tigers kicked off their pre-season with a pleasing effort against a very hard working Victoria Point Sharks who pushed them for a full quarters yesterday at Redlands.

The Tigers got off to a quick start with early goals to Jack Gartlan who provided a strong target for the team all day as he accumulated six and set up a number of others.

It was of course a trial match so there was a bit of swapping and changing, but overall the influx of new talent and youth gave the coaching group reason to smile as the group dusted off the cobwebs to put together the type of play that has been spoken about over recent weeks.

A highlight for the day was the debut of fifteen year old Everton Wolves player Ryan Doolan who showed no signs of nervousness for the occasion as he marked and calmly kicked a goal with his first touch in senior footy in the first term of the game.

Hervey Bay recruit and Stedman Medal winner Marcus Dyson showed why he has been such a revelation in his local competition over the last two years with an impressive debut for the Tigers while Zac Quin carried on from where he left off last year to both get the midfield moving.

In a windy day, the Tigers got off to a strong start into the breeze but took full advantage in the second quarter to take a seven goal lead. The forward line shared the ball around to have each player hit the scoreboard in another pleasing result for the day.

Seb Windsor was busy on the wing to give the Tigers plenty of opportunities as he accumulated a solid number of possessions while Jack Collings put in his usual strong in and under performance in the middle.

On the other wing Harley Goodwin was also energetic as he used his penetrating kick to maximum effect.

The Tigers swapped some of their key personnel at the main break with big men Sam Nevins and Dan Schmidt easing themselves into the fray. Both showed plenty of what everyone can expect from them this year as they provided first use of the footy for most of the day while new big man Matt Storey was also very useful in a range of roles he performed over the course of the day.

In the end it was a good opportunity to have a look at everyone against a club that is destined to be promoted to Division 1 in 2021.

The Tigers will meet Kenmore next week with the Bears also planning to move up to Division 1 next year.