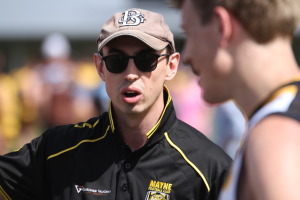 Bill Stephens has been a Tiger since he was six years old joining the club at Auskick level following in the steps of his two older brothers.

However he has made an incredible contribution to the club since that time both as an impressive leader through his junior days and then as an uncompromising and courageous defender in the Tigers Triple Premiership teams.

Bill made his debut in the seniors as a raw sixteen year old in 2009 playing a full season which heralded his impressive career. He went on to play 92 senior games for the Tigers before his playing career was cut short by a critical diagnosis that he had suffered too many concussions as a result of his courageous playing style.

Bill’s love for the Tigers and the game was not going to end there and he has volunteered as a Senior Assistant Coach for the last three seasons and will once again line up with Josh Duffy to help steer the club on to more success in 2020.

Bill’s knowledge of the game and his professional approach to anything he sets his mind to is not lost on the club hierarchy and will be followed closely as he continues his coaching apprenticeship. Watch this space!