Memories are made of this - Noel Best, a mighty Mayne Tiger 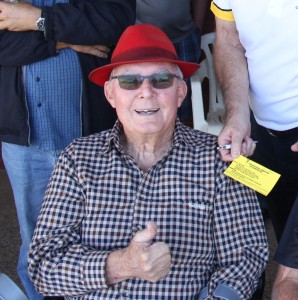 I wish to simply present my MEMORIES and a story with My Friends at our Mighty Mayne Tigers.!!

After Winning as 1958 - Mayne Tigers Premiers -- in 1959 I gained employment as Intern - Electrical Engineer -  in Burnie Tasmania. As I travelled to Tasmania I carried with me a Letter of Introduction that was prepared by our Mayne Tigers Official - Digger Butler - and commenced my work.

Then I found the Burnie Tigers home ground and met their Team Manager to whom I handed Digger’s Letter of introduction. He read it in front of me and I noticed his look of ‘‘concern’’! He then said '' Wait here a minute'' and talked with others club officials also attending this training session. Five minutes later he came back to say “BUT BUT! Aussie Rules is NOT played in Brisbane!

WOW!! I thought what can I do about this Statement? So quickly I found my Mayne AFC 1958 Team Photo in my footy bag and proudly showed it to the Manager who then handed it to the other Officials. And their decision was ''OK come back Thursday and train."

Thereafter with the help of my work mates, who also played for Burnie Tigers, I commenced training with this Club and played my way into their 2nd 18 Team and enjoyed my new club experience and games played in a higher standard than QAFL at that time.

During the 1959 season Burnie Tigers became a Top 2 Team in both 1st and 2nd competition -- and I was selected into the 1st 18 team for several games otherwise I played in the 2nd 18 team -- and I was able to establish good team player friendship in both teams.

Would you BELIEVE this? The Burnie Tigers - both 1st 18 and 2nd 18 Teams -played their way into their respective Grand Final matches! And- now please BELIEVE this! I played in Tigers 2nd 18 match and (if I may say this) I dominated in the first half in my Centre position (same as I did for Mayne in 1958 Grand Final). However during half time the Tigers teams selectors came to me and said we are taking you out of the 2nd 18 because we need your playing ability in the second half of 1st 18 match to help us win.

Now I am proud to report that the Burnie Tigers WON both 1st 18 and 2nd 18 Team Grand Finals and were crowned Premiers in both grades.

So finally my memories will end soon? In December 2019 I returned to Burnie and enjoyed a RE-UNION celebration with the remaining number of our 1959 Premiership teams. It is sad that many players have since passed away and some others are now in Nursing Homes. But I now realise full well how Lucky I was to have been a Team Player in both these Burnie Tigers Dual Premiers Teams.

Another enjoyable time I had whilst in Burnie was to contact and arrange for to have a coffee, cake and chat with a couple of ex-Mayne players Errol  Kenworthy and his wife, as well as our Mighty Mayne Tigers - player and loyal Club friend Shane Johnson and his wife Sandy.

How lucky I am to be a Mayne and Burnie Tiger!