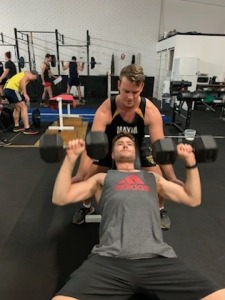 Training has been in progress for three weeks now with a very strong participation recorded across all grades.

The average number of players in attendance has been just over 50 making this the most successful pre Christmas period in many years.

Coach Josh Duffy has been extremely pleased with the turnout and the way that the group has embraced the programme.

Josh has also been very pleased with the range of new faces joining the group with some handy recruits already in training and a few in negotiation who will begin early in the new year.

The club has invested in a range of new equipment to assist with training to assist with strength and conditioning for the new year and this has already been put to good use.

The group has also been establishing relationships with a number of local gyms with sessions being held at Resistance Sport and Science at Enoggera while Glenn Kirby has his loyal following for his new gym at Elevate Training Centre.

The team will be spending this Saturday at Adam Minchev’s North Lakes Health and Fitness Centre which will include team based conditioning followed by lunch. The session starts at 9.15am.

Training will continue until the 19th December 2019 with a simple break up for Christmas that night and then Pre-Season will recommence on the 14th January 2020 in earnest as the club prepares for Round 1 on the 18th April 2020, a much later start than this year.

Plenty of room for more recruits and enquiries can be made with the following coaches.