Duffy to take on Tigers Head Coach Role for 2020 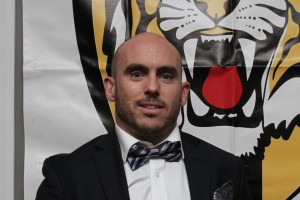 It is with great pleasure that the Mayne Football Club announces the appointment of Josh Duffy to the position of Head Coach for Season 2020.

Duffy joined the Tigers in 2013 when he moved to Queensland with his lifelong friend Shaun Daly in what has been one of the most successful recruiting packages the club has been fortunate to achieve in the long history of the club. While the two mates came with plenty of experience playing in finals in the Albury region, they have been a revelation for the Tigers playing in six Premierships between them for the club over the last seven years. Daly also coached the Tigers to two of their three Senior Premierships in that period while Duffy has coached two of the four Reserves flags while taking them to two other finals campaigns as well. Duffy has played in two senior premierships and two Reserves Premierships.

President Russell Ditchburn remarked that while appointing Josh was a very popular decision, it was also a very strategic one as well with him now being such an intrinsic part of the Tigers fabric and history and his record spoke for itself. Ditchburn further advised that he was also a terrific club person making for a wonderful package for the club.

In another extraordinary association to the Daly/Duffy combination, their good friend Clint Brunnenmeyer coached the Tigers to their other Senior Premiership in conjunction with Queensland Football legend Danny Craven in 2016 rounding out some remarkable success for the club.

Tigers outgoing Head Coach Chris David let the club know at the end of the Home and Away season that he was looking to have a break after two enjoyable years with the club. Club President Russell Ditchburn paid tribute to Chris for his terrific work over the last two years in a time where the club was in transition with a significant influx of young players and the retirement of some well known names. It therefore seems no surprise that the club enjoyed such success in 2019 despite the unfortunate injury plagued season for the seniors.

It is credit to Chris and Josh and the club’s impressive Assistant Coaches working together that has made this Season’s success possible and the club now sees the future as very bright.