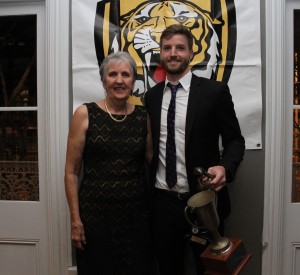 Club Captain Jack Collings equalled a recent record last night with his much deserved selection as the Mayne Tigers Club Champion for the third consecutive year. Collings paid tribute to one of his most respected heroes in Shaun Daly who also completed the trio in 2013, 2014 and 2015.

Collings received the much desired Keith Beavis Trophy and was also equally proud to be awarded the Mick Nolan Player’s Player Award in double recognition of his stellar season.

Troy Hammond was judged Runner Up in his debut season for the Mayne Tigers after a hiatus of two years out of the game. Coach Chris David paid tribute to Hammond’s approach and his desire to improve week to week.

Zac Quin completed his amazing debut year by being awarded the Rising Star, the Everton Award and the Best in Finals in the Reserve Grade.

In other awards for the Seniors, Dean Hartley continued his consistent record at the awards night with a Best Clubman Award for his dedication to supporting and mentoring his young proteges.

Young defender Mitch Bruce was awarded the Most Consistent, while Nick Warren received the Most Improved for his constant improvement during the season after being out of the game for two years. Corbin Dickfos was presented with the Coaches Award for his dedication to the team despite an injury ravaged season while Fraser Thompson was a much deserved winner of the One Percenter Award.

Danny Evans made it an unprecedented four times Graham Walters Trophy Winner for the Best and Fairest in the Reserve Grade, having previously taken out the award in 2012, 2013 and 2014.

Jake Magill took out the Reserve Grade Runner Up Best and Fairest Award and proudly shared the Peter Ives Player’s Player Trophy with Danny Evans to round out another terrific season for the two dedicated Tigers.

In other awards for the Reserve Grade Justin Moritz received the Most Consistent Award while Alex Walmsley received the Coaches Award and Gus Shaw the Best First Year player in a dream start to his senior career shouldering the ruck as a raw seventeen year old.

In a much appreciated award, Alistair Norris received the Most Improved Trophy for his strong year culminating in his first premiership medal and due reward for his dedication to the team.

Scott Forrester was the much deserved winner of the Best Clubman while Andy Tydink once again took out the Most Courageous. Ben Doxey was awarded the One Percenter for his rugged approach in his return to the Tigers.

In the Thirds, Captain Tony Stevens was the popular winner of the John Laing Trophy for Best and Fairest while Oscar Dielemans was his equally popular Runner Up. The Thirds were well represented last night enjoying a great night to support their close knit group. Coach Murray Laing paid due credit to the core believers in the team while also thanking Assistant Coach Tom Ditchburn, Team Manager John Laing and Club President Russell Ditchburn for all of their consistent help over the last five years.

In other awards, Sam Neller received the Best Team Player, Dan McCarron Most Improved in his first year, Chris Anderson the Coaches Award, Dylan Matheson, Most Consistent and Ben Walker Most Courageous.