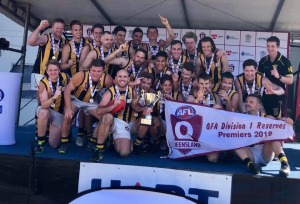 The Mighty Mayne Tigers took their game to new heights yesterday at AFLQ Headquarters in the Grand Final to shut out the Noosa Footy Club for more than three quarters and comfortably take home the club’s eighth premiership in six years.

The Tigers came through the finals series with more confidence every week, having been called upon to play week to week footy. Coach Josh Duffy recalled last night that he slept really well on Friday night in the knowledge that they had ticked all the boxes over recent weeks and he knew his team was in the right place to do everything required.

The Tigers came out of the blocks in aggressive fashion to knock the unbeaten Noosa team off their individual pegs at every contest in what can only be described as frightening.

The pressure work and tackling around the ground with Ben Doxey cannon balling several Noosa targets, Kane Tyson in the ruck and around the ground and Joe Amery up forward were key weapons but young gun Zac Quin was off the charts for possessions and unstoppable.

The Mayne side controlled to ball in their forward fifty for almost the entire first quarter and but for some nervous kicking for goal which saw the first goal take almost twelve minutes to arrive with a running effort from Danny Evans, it could have been a very significant margin.

Brimming with confidence, the local Tigers came out for the second quarter with even more determination to show their opponents that they would be the top cats for the big game.

It would be another shut out in the second quarter with four goals from the rampant Tigers culminating with a cool as you like set shot from the boundary by Jack Gartlan to send them into the main break with a thirty seven point lead and all the momentum. In further evidence of the Tiger’s dominance the backline was holding solid with their systems all working to perfection to keep the Noosa team goalless to this part of the game. Andy Tydink was terrific in his reading of the game and the use of his strong frame while Josh Duffy and Stew Settle used their guile to maximum effect.

The Noosa team came out after the main break determined to regain some pride as they threw all they could at the Brisbane based team but to no avail. They still couldn’t record a major for yet another quarter while the Mayne Tigers kicked another goal thanks to a game breaking run and pass by Ben Doxey to Kane Tyson who slotted it home to push out the margin to an unassailable proportion in the context of the game.

The Coach urged his men to finish it off at the final break and after a magical snap from Corey Massingham in less than a minute followed by a running goal from the tightest pocket by Zac Quin, you could start to hear Tigerland being played.

The Noosa Tigers were able to finally kick a few late goals but it was a day to celebrate for the Mayne Tigers with a comprehensive effort to take home the silverware.

The Tigers played in front of one of the biggest crowds they have seen for many a year with a terrific turnout of the Tiger Army encompassing all the years.

To round out the day, Zac Quin was judged best on ground. While only a mere eighteen years, but with maturity way beyond, he gave a very accomplished speech to accept his medal.

The partying has gone on way into the night and will no doubt continue for a few days yet.

All that is left to say is Eat em Alive!