Tigers charge through to Grand Final 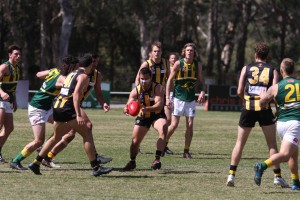 It was back to Noosa yesterday for the Tigers Reserves to take on the Maroochydore Roos for the third time in a month, this time for the all important do or die Preliminary Final.

The Tigers have travelled from one end of the Gold and Sunshine Coasts to the other over recent weeks to make this final and with the semi final last week also played at Noosa this was not just a home game in name only.

There has been some tremendous rivalry between the Tigers and the Roos over recent years and with everything on the line both sides were ready for this one. The Tigers had won the last the two encounters and were quietly confident they had the Roos measure however the Roos had other ideas.

The Roos came out firing in the first quarter making full use of their run and spread to catch the Tigers off guard but it settled into a shootout with both sides peppering the goals and unable to achieve a clear advantage. The Tigers could only manage the one goal from Corey Massingham while the Roos kicked five points and a solitary major to go into the first change three points the better.

The Tigers started the second term with two goals and seemed to have the game under control until the middle of the quarter when the Roos broke free to kick four unanswered goals through to the main break to take a three goal lead and all the momentum. The Tigers were battling hard through the considerable work of their midfield with Adam Minchev and Ben Doxey doing a power of bullocking work. However the Roos backline had got on top creating strong attacking raids to put the Tigers under enormous pressure.

After last week’s third quarter heroics it was time once again for the coaching group to find some more magic to get the Tiger’s game on track. It has been one of the positive by-products of the Tigers difficult season in the seniors that there has been a lot of experience gained and versatility available.

Josh Griffiths was switched to the backline and immediately had an effect as he took several early intercept marks to stop the Roos attack. Meanwhile, Jack Gartlan went forward in dramatic effect to mark strongly and kick three of the next eight goals for the Tigers without reply to storm the game in one of the best quarters of football anyone could expect to see at any level of football.

Whether it was the mercurial midfield work of Danny Evans and Zac Quin, the ruckwork of Kane Tyson and Gus Shaw or the pack crashing Doxey and Minchev, the Tigers owned the middle of the ground for twenty amazing minutes to set the Tiger faithful into raptures.

The backline held strong and launched their own raids with one exciting give and get effort from Stew Settle through the middle of the ground highlighting the potential of this team when their tails are up.

The forward line duly responded sharing the goals around with Massingham, Joe Amery, Jordan McDonald and Nick Holleran all getting into the action.

It was essentially all over by the last break with the Roos completely shellshocked by the Tigers onslaught. The Tigers won the last quarter in a more settled fashion to charge into the Grand Final to be held at Yeronga next week against the Noosa Tigers.

Once again the Tigers will be looking for more of the tremendous support that has been a feature of the finals series to date.