Tigers within a whisker .... 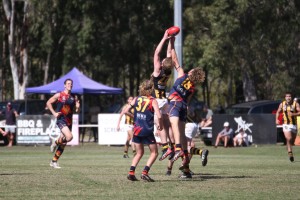 The Tigers Reserves travelled to Weyba Road, Noosa to take on the unbeaten ladder leaders the Noosa Tigers yesterday in the Semi Final and came within a whisker of being the first team into the 2019 Grand Final.

It was another tremendous battle between the two clubs in this grade with prodigious contests occurring continuously over the last six years.

The game was another battle of momentum for the entire day with the Mayne Tigers taking a one point lead midway through the last quarter, then dominating possession and field position, spraying the goals with several attempts to ice the game before a debatable umpire’s decision in front of the Noosa goal killed the contest in the last minute.

The Mayne Tigers certainly had their chances to finish the game off and will be champing at the bit to get another opportunity to show they can take their season to the ultimate result.

The Noosa Tigers hadn’t played for two weeks with a bye in Round 18 and then sitting out the first week of the Finals waiting for yesterday’s contest. While the Mayne Tigers went forward first and looked to be ready to go, the local Tigers showed immediately thereafter how desperate they were to get involved as they kicked three straight goals to stun the visitors with their spread and speed.

It was then time for the first momentum shift of the game as the Mayne side slowed the tempo to kick the last two goals of the quarter thanks to Andrew Housego and then Josh Griffths pushing forward to go into the first break with their own tails up but a five point deficit.

The Mayne Tigers started the second quarter as they had finished the first with the same positive play kicking the first two goals to take an eight point lead and look very dangerous. However, the switch was turned again as the Noosa Tigers stepped up to kick the five goals in emphatic fashion to leave the Mayne Tigers reeling as they went into the main break.

There has been plenty spoken about the nature of these contests between these two clubs at this level so it was never going to be over this easily with plenty of pride on the line. The Tigers Coach Josh Duffy has willed his side on for the last four years and particularly as an on field general over the last two years. He once again enthused his group at the main break to get back on top and with a couple of key changes it was always going to come.

The Mayne Tigers needed to win more centre contests against their much bigger opponents and this is exactly what occurred with Danny Evans, Zac Quin, Adam Minchev, Ben Doxey, Jake Magill and Duffy himself taking control.

The Mayne Tigers kicked three goals, one a ball burster from Ben Doxey from the boundary and importantly held their opponents goalless to be back to a seven point margin and hold the momentum again at the end of the third term.

The last quarter was all Mayne but for a Noosa free kick in front of goal early in the quarter as they held the ball in their forward fifty. Two big goals from Danny Evans and Adam Minchev put the scores to level and then a point gave them the lead.

Despite several more shots on goal, the Tigers missed their chances to finish off the locals as they ended one kick away from a dream finish. They will however take plenty away from this effort using this disappointment to spur them on next week.