Tigers advance in finals with win over Roos 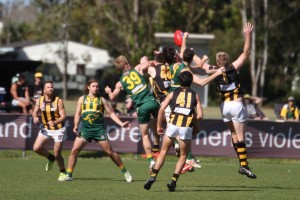 After a very dogged four quarters where the Tigers Reserves led all day, they pulled off a stirring win over long time foes the Maroochydore Roos yesterday at Fisherman’s Road in difficult swirling windy conditions.

The Tigers beat their more fancied opponents two weeks ago at the Den in Round 17 to give them confidence but both sides were able to add some critical firepower to their lists since that game so things were always going to go up a notch.

The Tigers got off to a great start to lead by a goal at the first break thanks to a terrific goal from the boundary by young gun Jack McNevin.

It was vintage Andrew Housego in the second term that gave the Tigers a tall target drawing two and three defenders at every forward entry which gave them what ultimately proved to be a match winning margin. Despite all the attention Housego kicked three goals to break the game open, one on the run which lifted the Tigers spirits across the ground.

Zac Quin was also busy kicking the Tigers other second term goal to give them a fifteen point lead at the main break and a sense that success might be around the corner if they could remain focussed on the team’s strategy.

Tigers young ruckman Gus Shaw was doing a power of work while Kane Tyson did a great pinch hitting role in the ruck but it was his work around the ground which gave them the necessary momentum.

The Tigers backline held strong with numerous strong marks taken by Josh Griffiths to intercept the Roos attack while veteran Todd Banfield showed his usual composure along with recent 100 game Tiger Stew Settle who provided plenty of attack off the half back line.

The Roos came out after half time with a big challenge in mind however with full credit to the Tigers composure they absorbed all the pressure to arrest their attack and return the game to the tempo that they wanted to play the game.

The lead remained at a slender eight points at the last break with a blustery wind slightly favouring the Tigers end of the ground albeit to a dead pocket.

It would be ten minutes before either side could score a goal with heavy contests all around the ground. Harley Goodwin took a strong mark but was hit very heavily in the process and was significantly winded. The umpires took a dim view of it giving Goodwin a 50 metre penalty and a better chance of increasing the Tigers lead. It still wasn’t an easy shot with the wind circling and a fair angle but full credit to the young lad as he composed himself to effortlessly slot it through.

The Tigers now led by fifteen points again and had their tails up. While the Roos kicked another goal, the Tigers quickly responded to retain the larger lead.

The remainder of the quarter was played out in the dead pocket with an extraordinary number of throw ins extending the quarter to nearly thirty minutes where the Tigers held the ball awaiting the final siren and a wonderful victory.

Full credit also goes to playing coach Josh Duffy who was instrumental in providing the onfield leadership and direction necessary to pull off the win.

The Reserves will now take on the unbeaten Noosa Tigers at Noosa next week in the game that will determine who goes into the Grand Final first.

While there was plenty of the Tiger faithful at Maroochy yesterday, the club will be hoping that plenty more get on board to cheer the team on next week. Perhaps a nice weekend at Noosa might be just the ticket!!