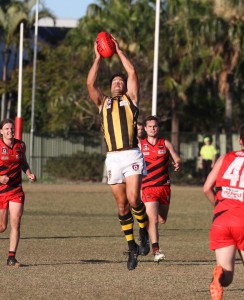 The Tigers finished their 2019 season with a strong last quarter to overcome a determined Burleigh Bombers at Godfrey Oval yesterday in a must win game for both teams, each looking to take some momentum into their respective summers and set up for the new competition in 2020.

In an impressive start to the game, the Tigers shot out to a handy margin at the first break with key forwards Nick Warren and Troy Hammond getting into the action early and if not for some inaccurate kicking across the team it could have been a comprehensive lead.

The Bombers were not to be denied though as they worked hard to arrest the Tigers momentum. The Bombers quick transition and delivery to their spearhead Calhan McQueen was proving a thorn in the Tigers efforts to break away. McQueen kicked the last goal of the first quarter and then a quick one to start the second. The Tigers Zac McLean gave them an avenue to goal with two strong marks and goals in response but McQueen was making it a shootout as he kicked another goal but was unusually inaccurate providing some reprieve in what proved to be a tough second term. The Bombers Dean Martin received a free kick on the siren and kicked truly to narrow the margin to just eleven points at the main break.

The Bombers went into the break with their tails up setting the scene for a tight second half and that is exactly how the third term played out with McQueen kicking another two and the Tigers only managing one major to leave a one point margin at three quarter time.

Coach Chris David set the scene for the Tigers to finish the game off, not panic, but play the roles required.

It was a relief to all that the Tigers broke loose with Troy Hammond, Zac McLean and Nick Warren taking consecutive marks from quick forward entries and each finishing the job effectively. They had broken the Bombers resolve at this point and while they managed to kick a goal, the Tigers Ryan Eyles kicked the sealer to finish the season for the Tigers and allow the group to enjoy a much needed break and celebration in what has been one of the most difficult seasons for injury and the commensurate disruption for many years.

Whilst it is always the objective to play finals the Tigers five wins underlined numerous close games which could have gone their way as well. The Tigers blooded several young players and built their list with some very impressive recruits which it is hoped will auger well for 2020.