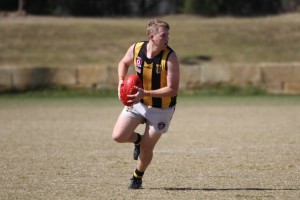 It is with much pleasure that the Mayne Football Club acknowledges and congratulates Stew Settle on his 100th appearance for the Tigers Reserve Grade as he runs out this weekend, only the fifth player to achieve this feat in more than twenty years for the club.

While Stew is now an experienced attacking defender, he was a product of the Mayne Juniors, first donning the black and gold for the club way back in the under 8’s in 1999 at just five years of age in what has been an amazing cohort of players for the club with the likes of Bill Stephens, Scott Forrester, Scott Vanderwolf, David Tyquin, Jaxon Quaife and RJ Sapolo all in the same group at the time and in turn making their way through to senior footy to play important roles for the club.

After playing several years for the Tigers he was lured away to play rugby with Brothers with several of his Grammar schoolmates also playing for the school and club rugby together through his early teens.

However, the passion for AFL was always strong and he thankfully returned to the Tigers to play under sixteens and eighteens with the same close mates as well as some other handy players in Spencer Greville and Ben Doxey.

On the back of his rugby experience, Stew has never been afraid to challenge himself so it was during his colts years as a raw seventeen year old that he made his debut in open age footy against Sandgate backing up the Reserves in 2011 in a time when the club was searching for youth just like him to push through.

After officially graduating to the senior group for the 2013 season Stew became a fixture in the Tigers Reserve grade at a time when the club was building a formidable playing group which batted well into the second grade. He played every game in the breakout 2014 season in the Reserve grade only to miss out in the finals due to the incredible depth of the group which went on to achieve a premiership along with the seniors.

While disappointed to miss out on the 2014 finals, he was never the type to be daunted by the experience, moreover it drove him to work harder in 2015 especially given the quality of the playing group and coaching staff at the time. He very proudly made the side for the finals in 2015 and was an important part of the Tigers dominant defensive group which the second premiership was built upon. He went on to be part of the Tigers Reserves all conquering 2016 Premiership team as well and has been an important part of the leadership contingent ever since for the Reserves.

The Tigers three years of Premierships in both the seniors and reserves is a period which Stew clearly cherishes having been a part of and he speaks very fondly of the critical role that Neville “Nifty” Miller and Shaun Daly played in getting the best out of him and the group at the time. It was an amazing time for the club with hard work bringing due reward. The two larger than life role models not only knew how to get the best out of their teams, they also knew how to have a good time as well which further made it a special time.

He also talks highly about current Reserves Coach Josh Duffy who has been a big part of the Tigers success over the last six years as a player and coach. The Reserves group are in the finals for the sixth consecutive year and with a young and skilful group, they will be looking to go deep into the finals again.

An easy person to coach, given his intelligence, leadership attributes and willingness to do his best, Stew has won two Coaches awards during his time and always polls well in the annual voting.

A true club person who will always sacrifice his game for the team and none more so than in the last two years, he has played important roles for the senior team as well when required.

The best news for the Mayne Footy Club is that he is still only 25 years of age and is hoping to play another 100 games if he can, such is his passion for the Tigers and the game. It is for sure and for certain that the Tigers hope that he will too.