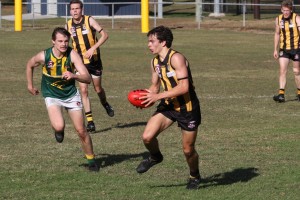 In a repeat of history from 2018, the Tigers came up against a rampaging Maroochydore Roos at the Den today as they storm towards the finals again. It is obvious why they are set to move into the QAFL for 2020 given the strength of resources at their disposal.

However, importantly it was Sam Paterson’s 100th appearance for the Tigers so the game started with due celebrations for the Ultimate Warrior who has given his all and more for the club he loves.

Despite the festivities the Roos showed no respect for the Tigers as they got off to a strong start settling into their forward fifty for the first fifteen minutes of the game. The Tigers did very well to limit the Roos to just five goals while kicking two themselves in a tough start to the game.

While the Tigers defended desperately, it was not until the Third quarter before they were able to score another major .

The Roos forwards Scholard, Norman and Gale were making life very tough for the Tigers and with the loss of key defender Ben McElligott in the second term things were pretty desperate. However the Tigers other defenders in Dean Hartley, Mitch Bruce and Fraser Thompson worked very hard to contain the Roos big forwards.

Zac Quin returned to the Senior group to once again play beyond his years in the midfield while Jack Collings also did all he could to get the troops going. In typical fashion Sam Paterson left the field seemingly gone for the day after a heavy knock only to resurrect himself in the second half and fight to the last minute of the game.

Up front the opportunities were rare however key forwards Nick Warren and Troy Hammond battled hard while Joe Amery got a fair amount of the footy to kick two goals.

All in all it did not turn out to be the game that everyone had hoped for with the Roos running out easy winners in a comprehensive display.

Sam Paterson was carried on shoulders from the ground at the conclusion of play and was clapped off by the Maroochy team in a very nice showing of sportsmanship.

The Tigers will now play their last game of the season against the Burleigh Bombers at Burleigh next week and will be looking to finish off their season with a win and some momentum for 2020 in the hope that the injury gods will be more generous to them as well.